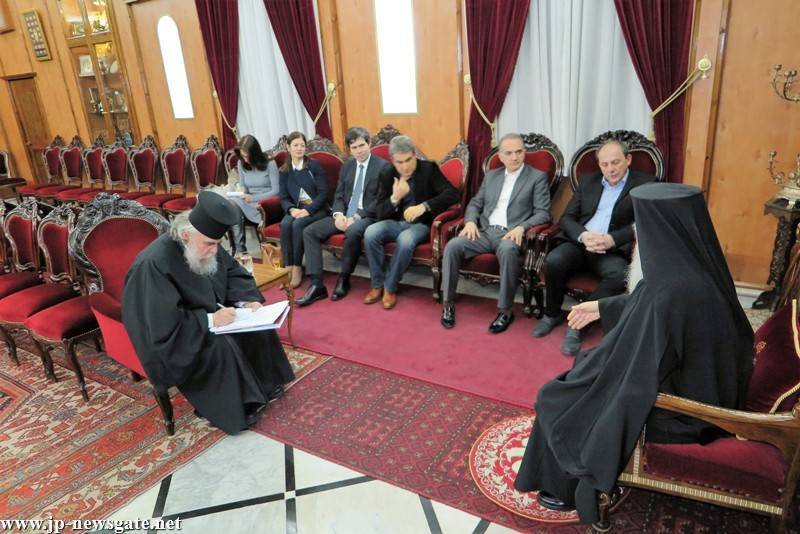 On Ash Tuesday evening, 15th/28th February 2017, a three-member Delegation of Ministers visited the Patriarchate. They were, Mr. Christos Karagiannidis (Head of the Greek Delegation in the Parliamentary Assembly of NATO), Mr. Marios Salmas and Mr. Andreas Loverdos, who have been participating in the common meeting of the special Team for the Mediterranean & Middle East, together with the Committee of Science and Technology of the Parliamentary Assembly of NATO. This Parliamentary team was escorted to the Patriarchate by the Consul General of Greece in Jerusalem Mr. Christos Sophianopoulos.

The Parliamentary team was received by His Beatitude with the Patriarchal Commissioner Most Reverend Metropolitan Isychios of Kapitolias, Dragouman Archimandrite Mattheos, the Master of Ceremonies Archimandrite Bartholomew and Archdeacon Mark.

In the agenda of the meeting there was an interesting conversation on the existing unstable political situation in Jerusalem and the counterpoising role of the Patriarchate as a religious organization which preaches appeasement, reconciliation, righteousness and peace, and exists as a reference point for the identity and the protection of the Christians, being an institution with a long and rich religious and cultural tradition.

On the occasion of this visit, the Delegation offered His Beatitude a copy of the Museum Benaki medal with a depiction of the tree of life, while His Beatitude offered each of them an icon of Theotokos of Jerusalem and the Holy Edicule and a medal of the 2000 years of Christianity.
From Secretariat-General