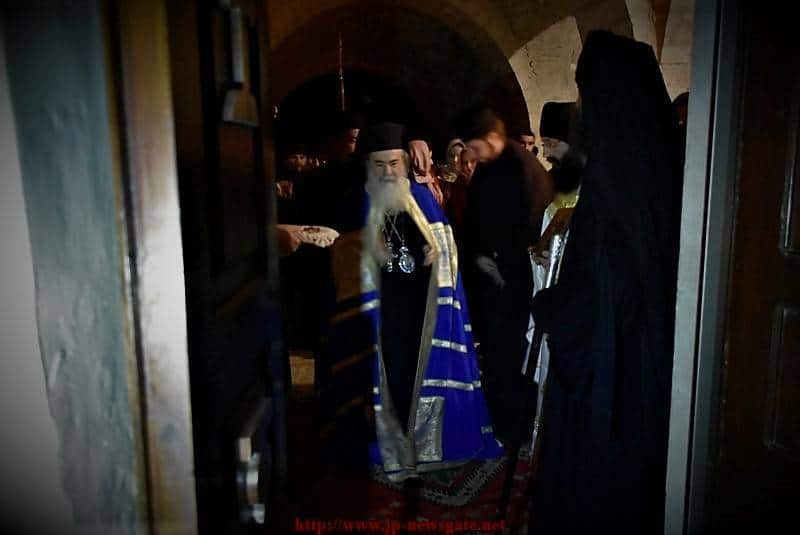 THE FEAST OF SAINTS IOANNIS AND GEORGIOS THE CHOSEBITES

On Saturday 8th/21st January 2017, the following day after the Feast of Theophany, the memory of Saints Ioannis and Georgios the Chosebites was celebrated by the Patriarchate at the founded by them and dedicated to them Holy Monastery of Choseba, located at the banks of torrent Chorrath below the Sarantarion Mount and the city of Jericho.

Out of these two Saints, Ioannis was Bishop of Caesarea in Palestine in the 4th century, but he abandoned the pastoral care and became a monk in the Choseba Monastery, drawing a great number of monks there, while Georgios, of Cypriot origin, came to the monastery and renovated it from the damages, deterioration and destructions caused by the Persian raid in 614.

As evidenced by the history, before the time of these two Saints, four Anchorites lived in this monastery, named Promos, Zenon, Ganneos and Aian, and for those who remember, in the decade of 1950s the recently Canonized Romanian Saint Ioannis the New Chosebite lived there. Moreover, monks there were the memorable Hegoumen Archimandrite Amphilochios from Epirus, Archimandrite Antonios from Thessaloniki who was killed at the monastery while repairing the wall of the Narthex in the Church. His successor, also from Thessaloniki, Archimandrite Germanos was unjustly murdered by an irreverent man while he was driving back to the monastery. Archimandrite Gabriel was an ascetic at the cave of the steep cliff there, and at St. Anna’s Skete near the monastery a Cypriot monk and the icon painter and editor of the Gerondikon, monk Pavlos lived an ascetic life. At present monk, Blaze lives at the same place.

The stewardship of the monastery was appointed for some time by H.H.B. our Father and Patriarch of Jerusalem Theophilos to the Hegoumen of the Monastery  of St. Gerasimos of Jordan, Archimandrite Chrysostomos, however in the last few years His Beatitude appointed as Hegoumen, Archimandrite Constantinos, who having joined the Brotherhood from the H. Archdiocese of Thebes and Livadia, manned the monastery with an entourage of Fathers and renovated the construction sites of the Church, the cells and other areas.

On the above mentioned day, His Beatitude was graciously received by the Hegoumen of the Monastery Archimandrite Constantinos with the following address in Greek:

“Your Beatitude Father and Patriarch,

With Your Reverend Entourage,

The Saints and Founders of this Holy Lavra, Ioannis and Georgios the Chosebites, as the holy hymn writer mentions, came to the desert of Judea, “in a dry and thirsty land, where no water is” having renounced the world. By their ascetic life and catharsis against the passions they gave a strong blow to the devil; and they especially managed this in his stronghold, in the desert!

Indeed, every newly founded Monastery is a trophy victory against the devil, while its annual feast constitutes an attribution of honour to the winners (!) its Saints, who defeated the enemy of our faith, just like the Saints Ioannis and Georgios did! The Saints, who, whilst walking on this earth in present life, became citizens of heaven.

Friend of Saints, Father and Patriarch,

We are convinced that being present at the Divine Liturgy, every single day You pray for all of us the Hagiotaphite Brothers. Spiritually we feel Your Fatherly affection and experience the care of your Beatitude for the Venerable Patriarchate. With unblemished ethos, Your Beatitute you thrive, by maintaining, renovating, beautifying the Holy Shrines in all places belonging to the Patriarchate of Jerusalem. Prime examples of which are the maintenance projects – with the appropriate reverence and caution – at the Holy Edicule and at the Basilica that hosts the Nativity Cave in Bethlehem! You decorate the Most Holy Shrines just like Saint Modestos did, as the hymn writer writes for him.

As your Sons, we honour Your Beatitude’s

You are most welcome!”

Thereupon His Beatitude led the All-Night Vigil of the Feast and the Divine Liturgy, with concelebrants, Geronda Secretary-General Most Reverend  Arcbishop Aristarchos of Constantina, Most Reverend Metropolitan Joachim of Helenoupolis, and the Hegoumen Archimandrite Constantinos and other Hagiotaphite Fathers, at the singing in Greek on the right of the Chosebite Fathers, Archimandrite Seraphim of the H. Monastery of Geromerion, and Fr. Georgios of the H. Archdiocese of Elia, and on the left in Arabic, the choir of Archimandrite Philotheos, the Patriarchal Commissioner in Acre. Present were also the praying faithful pilgrims from the neighbouring to Jericho areas and other towns, as well as pilgrims from Greece, Russia and Romania.

To this congregation His Beatitude gave a Sermon in Greek as follows:

“The Lord magnified His saints on earth, in all His will in them. Their infirmities were multiplied, and thereafter they were quickened.

The Lord made His Saints in Palestine worthy of admiration, and all His good will and pleasure is found in them. Many were the sorrows of these saints, soon afterwards though they were vanished, the Prophet David chants.

Noble pilgrims of the relics of Choseba,

Our Lord Jesus Christ, surrounded by the waters of the river Jordan, did not need the purification for himself by them, but on the contrary he bestowed our own rebirth through his action, He gathered us all in this hagiographic and sanctified place, namely the Monastery of Choseba, in order to thankfully and festively honour the memory of our Father among the Saints Georgios the Chosebite.

Our Saint Georgios, having received the same name as the Great Martyr Saint Georgios the Triumphant, and of course having become an earnest imitator of Christ our God, who died in the flesh for our sakes, he strove to die and to be crucified together with Him, through apathy, and having reached the outmost apathy, he was granted the fullness of the Holy Spirit as the Synaxaristis writes for him.

In other words, our Saint Georgios was a featured martyr of his strict ascetic struggle, as St. Chrysostom teaches by saying: “The exercise of devoutness is martyrdom”. And according to Prophet David “All the paths of the Lord are mercy and truth unto such as keep his covenant and his testimonies (Psalm 25:10).

Our Father in Saints Georgios looked for a spiritual arena and found as the most suitable place the area surrounding the river Jordan, where John, Zacharias’ son was, preaching the baptism of repentance for the remission of sins (Lk 3:2-3), and Jesus, coming from Nazareth of Galilee was baptized by John in the river Jordan (Mark 1:9).

We say this, because the Monastery of Choseba, located within the borders of the Jordan area, became the baptismal site of Christ in the Holy Spirit, where a multitude of ascetics and monks were baptized in Christ and put on Christ, according to the words of St. Paul “Those of you who have been baptized in Christ, have put on Christ” (Gal. 3:27), and in another verse, “and that ye put on the new man, which after God is created in righteousness and true holiness” (Ephes.4:24).

St. Paul, who believed in Christ when “suddenly there shined around him a light from heaven” (Acts 9:3), was clad in the Light of Christ as in a garment, meaning the very same Christ, Who is the light of the world “I am the light of the world; he that followeth me shall not walk in darkness, but shall have the light of life” (John 8:12), says the Lord, and elsewhere, “I am come a light into the world, that whosoever believeth on me should not abide in darkness” (John 12:46), and “he that doeth truth, cometh to the light” (John 3:21).

In this unapproachable light, that glowed in the form of a dove on Jesus baptized by John in the river Jordan, our Father among the Saints Georgios was clad, who has invited us together with his fellow ascetics Ioannis and Ioannis the New Chosebite in this Eucharistic gathering, in order to glorify and together with the hymn writer bless our Holy Trinitarian God saying: “ the illuminating and lighting the people, Jesus the self-generated light, being baptized in the river Jordan, Thou shone a light consubstantial to the Father, in which all creation enlightened cries to Thee, blessed is the God made manifest to us, glory to Thee”.

Our Holy Church preaches this self-generated light, the Holy Trinitarian God and evangelizes God Logos, our Saviour Jesus Christ to the world. This self-generated light is being witnessed in words and actions, in practise and theory, by the Saints of our Church, meaning the friends of Christ, who being made of clay put on the image of the Heavenly One (1st Cor. 15:49) meaning the incorruptibility and resurrection of Christ. This fact is witnessed by the relics of the saints. This is also witnessed by the incorruptible and fragrant complete relic of the body of the Romanian St. Ioannis the New Chosebite, who was a spiritual student of our Father among the Saints Georgios. This is witnessed by the faith of us Christians, in the unspeakable mystery of the incarnation of God the Logos, our Saviour Christ, who was begotten by the pure blood of the ever Virgin Mary, born in the cave of Bethlehem, and baptized by John in the waters of the river Jordan.

Let us therefore my beloved brothers, purify perceptibly our senses and entreat our Holy Father Georgios by saying “to all those who honour you, grant enlightenment and communion with God”. Amen.

After the D. Liturgy, His Beatitude performed a Memorial Service at the graves of the three former Hegoumens of the Monastery, Archimandrites Amphilochios, Antonios and Germanos.

After the Dismissal, very early in the morning, the Hegoumen Arch. Constantinos offered a meal to His Beatitude and the congregation.