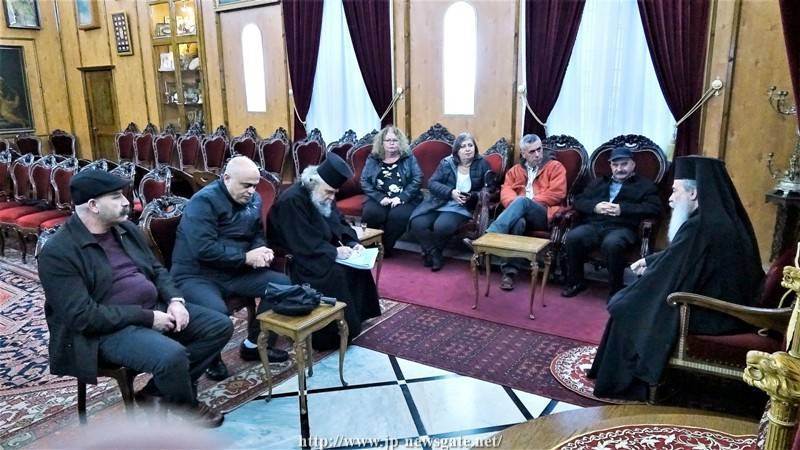 On the afternoon of Wednesday the 1st/14th of December 2016, senior employees of the Israeli Ministry of Internal Affairs, Mr Amos, Ms Tsipe, Mr Jacub Salame, Mr Cezar Margiye and Mr Nizar, visited the Patriarchate on the occasion of Christmas and the Jewish feast of Hanukkah. They were welcomed by H.B. Theophilos, Patriarch of Jerusalem, in the presence of the Elder Secretary-General, Archbishop Aristarchos of Constantina, and the Assistant Dragoman, Archimandrite Mathew.

During the meeting, a discussion took place on the upcoming feast of Christmas and the facilitations needed to be provided to pilgrims at the border checkpoints in order to reach Bethlehem, as well as travel permits to local Arabic-speaking Christians in order to travel through Ben Gurion airport. Facilitations are also necessary for Christians from Gaza and the Occupied Territories, traveling for the feast, and for the renewal of stay permits for the Patriarchate’s monks and nuns. At the end of the meeting, Patriarch Theophilos offered each member of the delegation a token of remembrance from their Jewish tradition, namely Hanukkah, that commemorates the victory of the Maccabean Jews against Hellenist idolaters, the successors of Alexander the Great and mainly Antiochus IV Epiphanes who had desecrated the Temple of Solomon.