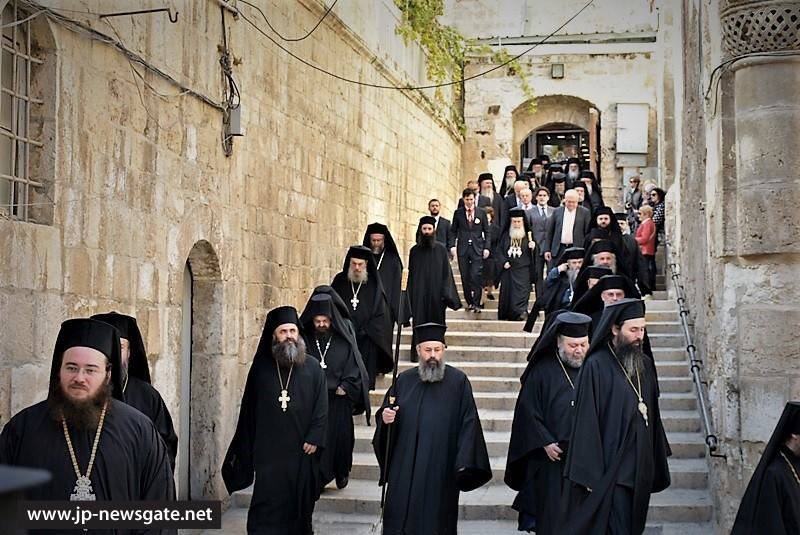 On Tuesday, the 9th/22nd of November 2016, the Hagiotaphite Brotherhood celebrated the 11th anniversary of the Enthronement of His Beatitude Theophilos, Patriarch of Jerusalem, at the glorious Throne of St James the Brother of God.

Doxology was held in the Church of the Resurrection at 10:30 am, led by His Beatitude, who had as concelebrants Primates and Priests. In attendance were members of the Greek Parish and the Arabic-speaking congregation, in the presence of the Greek Consul in Jerusalem, Mr Christos Sofianopoulos.

After Doxology, clerics and laypersons paid their respect to His Beatitude.

In his address, the Elder Secretary-General called the enthronement of Patriarch Theophilos a very important event, marking the unity of the institution of the Church, particularly the cessation of the tempest that had tossed but not sunk the boat of the Church of Sion. “Judging ourselves in humility according to Christ”, Archbishop Aristarchos said, “we can see we have done our best to respond to the mission and the work we have been assigned, the heritage we have received from our ever-memorable Fathers, to guard and to complete before delivering it, integral and enriched”.

Archbishop Aristarchos also referred to the relations of the Patriarchate with the other Orthodox Churches, e.g. the Patriarchate of Serbia, cultivated during the visit of Patriarch Theophilos to Serbia, and Mount Athos, where the Patriarch had led the feast for the Dormition of St Anne.

The Patriarchate’s participation in the Holy and Great Synod of Orthodoxy, held in Crete during the summer, as well as its support of Christians persecuted in the Middle East were also pointed out.

The crown of the achievements of the Hagiotaphite Brotherhood, said Archbishop Aristarchos, is the ongoing project on the restoration of the Aedicula of the Holy Sepulchre, in agreement with the three major Communities, and in accordance with a study conducted by the NTUA.

In his own address, the Greek Consul-General expressed the respect, love and gratitude of Greece for the great pastoral work of His Beatitude, the safekeeping of the Holy Shrines and the promotion of the ecumenical values of Orthodoxy.

“The Greek State and the Greek faithful”, said Mr Sofianopoulos, always endow you with their love and dedication, visiting the Patriarchate as humble pilgrims, thus proving the significance they ascribe to Your work and the work of the Hagiotaphite Fathers”.

Other representatives of the congregation and the sister Orthodox Churches addressed His Beatitude, who replied in Greek, referring specifically to the restoration of the Holy Sepulchre, the importance of which does not pertain only to this most holy monument, but also to the situation of Christians in the Middle East, tried by a civil war on the one hand and expatriation of thousands on the other hand.

In closing, His Beatitude Theophilos extended thanks to all those honouring Him with their presence on the anniversary of His enthronement.