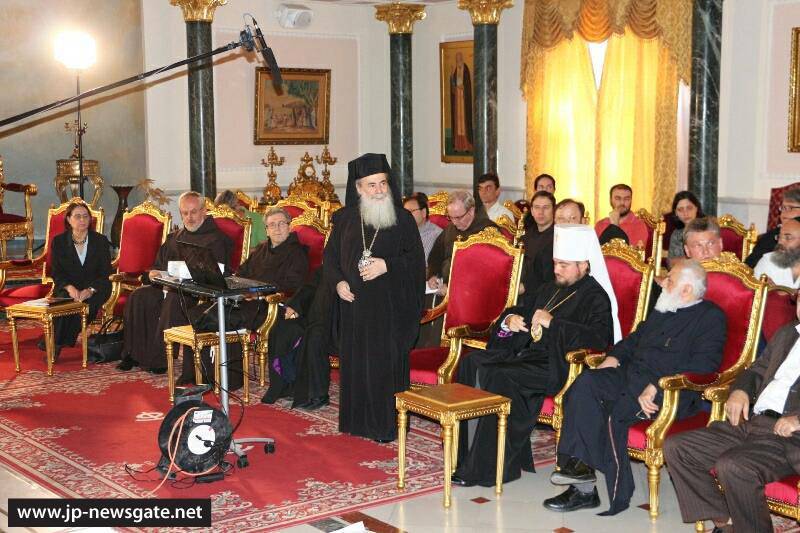 SECOND PRESENTATION OF THE AEDICULA OF THE HOLY SEPULCHRE RESTORATION PROJECT

On the morning of Friday, the 24th of September/7th of October 2016, after the divine Liturgy in commemoration of St Thekla the Protomartyr, the presentation of ongoing works on the Aedicula of the Holy Sepulchre took place at the Patriarchate’s Hall of the Throne. The on-screen presentation was made by the project coordinator, Professor Antonia Moropoulou.

In attendance were the members of the project’s Steering Committee, namely His Beatitude Theophilos of Jerusalem, accompanied by the Elder Secretary-General, Archbishop Aristarchos of Constantina; the Custos in the Holy Land, f. Francesco Patton, accompanied by Father Dobromir and f. David; the representatives of the Armenian Patriarchate in Jerusalem, Archbishop Sevane Garibian, and the Armenian hegumen of the Church of the Resurrection, f. Samuel Aroyan; Metropolitan Alexander of Pereyaslav-Khmelnitsky and Visentsky; the Chairman of the Palestinian Autonomy’s Committee on Christian Affairs, Mr Hana Amire; representatives of National Geographic, the Architect of the Church of the Resurrection, Mr Theodosios Mitropoulos, and the National Technical University of Athens’ contributors to the project.

The presentation can be viewed in detail on the relevant video. Special reference was made to the rock of the Holy Sepulchre wherein the immaculate Body of Jesus Christ was placed, the Aedicula’s construction materials and methods applied by its architect, Kalfas Comnenus of Mytiline, as well as on current methods of removing spoilt materials and replacing them with suitable solidification materials.  Ms Moropolou underlined that the Holy Aedicula is not an isolated, autonomous building in the Church of the Resurrection, but is inextricably linked to the surrounding Rotunda through the underground which must be restored in the near future, in particular its subterranean canal system, so as to impede the emission of moisture which damages the Aedicula.

In summarizing, Ms Moropoulou pointed out that the aim of the project is to reveal the structural values of the Holy Aedicula and perform works in a way that will safeguard its integrity as a Pan-Christian and global monument.

Professor Moropoulos then referred to the remaining works required for the completion of the project, i.e. removal of damaged stones and replacement with suitable ones, as well as the opening of a window on the Holy Rock. In doing so, Mr Moropoulos appealed once again to the leaders of the religious Communities to create the right circumstances for the continuation of the project by means of underground injections, aimed at completing the restoration before the Catholic Easter, namely the 6th of March 2017.

Of the greatest importance, Mr Moropoulos concluded, was to deal with the emerging moisture which, if left unchecked, would soon create the same problems. The continuation of these works can only occur by collecting the required funds on behalf of religious Communities and pious donors.