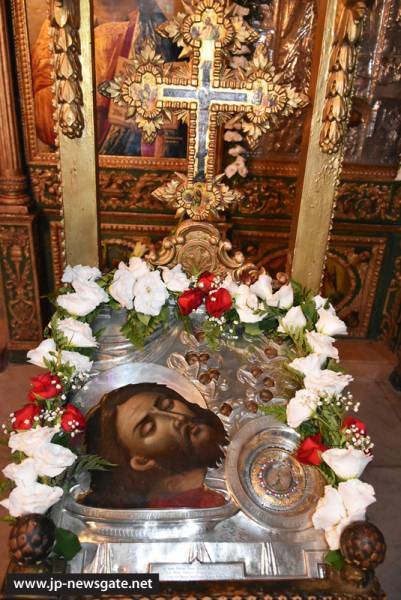 COMMEMORATION OF THE BEHEADING OF ST JOHN THE BAPTIST

On Sunday, the 29th of August/11th of September 2016, the Patriarchate commemorated the beheading of St John the Baptist at the Monastery dedicated to his name, standing to the south of the Church of the Resurrection. His memory is observed by the Church through fasting from olive oil except for Saturday and Sunday, in commemoration of the evangelical narration that Herod, criticized by the prophet John, Forerunner and Baptist, for his unlawful affair with Herodias, wife of his brother Philip, surrendered to her demand to deliver his head on a platter. During the banquet for Herod’s birthday, her daughter Salome danced, then asked for the head of John the Baptist, which led to the Forerunner’s criminal and unholy beheading (Mark 6, 14-29).

Vespers and the divine Liturgy were led by Archbishop Alexios of Tiberias, Patriarchal Commissioner in Gaza, having as concelebrants Hagiotaphite Hieromonks and Hierodeacon Mark. Archimandrite Eusebius, head cantor at Sts Constantine and Helen church, and Elder Nun Mariam Skorda sang during Vespers; Archimandrite Eusebius and Nun Danielia sang during the divine Liturgy for a pious congregation of monks, nuns, local Jerusalemites and pilgrims from Greece, Russia and Romania.

During the course of the divine Liturgy, Patriarch Theophilos venerated the icons, accompanied by Hagiotaphite Fathers.

The Patriarchal and Prelatic Entourages were then hosted to a reception hosted by the Monastery’s Hegumen, and Master-of-Ceremonies, Archimandrite Bartholomew.