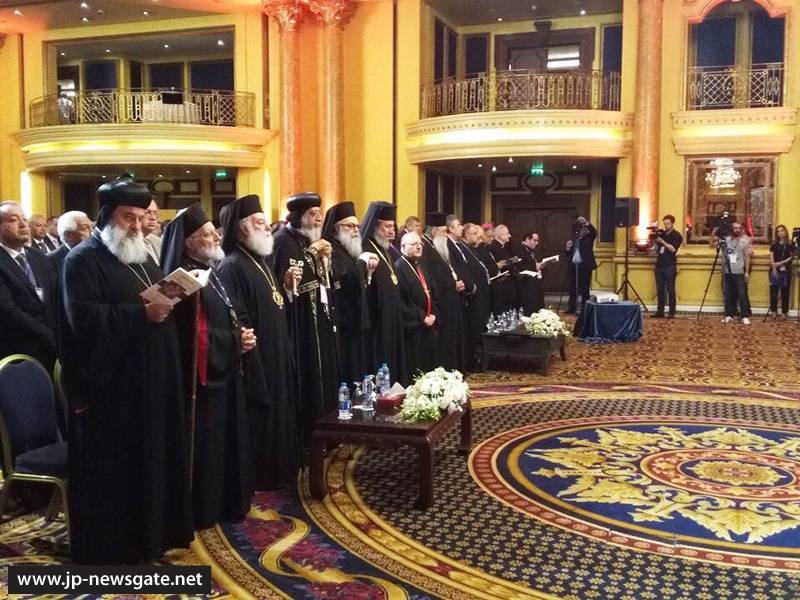 11TH GENERAL ASSEMBLY OF THE MIDDLE EAST COUNCIL OF CHURCHES

From Tuesday the 24th of August/6th of September 2016 to Thursday the 26th of August/8th of September 2016, the Convention of the 11th General Assembly of the Middle East Council of Churches (MECC) takes place in Amman, Jordan, at the Royal Hotel, under the protection of His Majesty Abdullah II King of Jordan. The Assembly is hosted by the Patriarchate of Jerusalem.

In attendance at the meeting were all members of the MECC, namely:

The General Assembly was so far headed by His Beatitude Theophilos, Patriarch of Jerusalem, as Chairman of the Orthodox Family;  the Armenian Catholic Patriarch Aram of Cilicia for the Pre-Chalcedonian Church; Lutheran Bishop Munib Younan for the Evangelical Family; and Patriarch Ignatius Youssef of Antioch and All the East for the Catholic Family. Maronite Fr. Michel Jalakh serves as General Secretary of the MECC.

Each Orthodox Church was represented by its Head, namely: Patriarch Theodoros of Alexandria, Patriarch John of Antioch, Patriarch Theophilos of Jerusalem and Archbishop Chrysostomos of Cyprus.

The deliberations of the General Assembly began on Tuesday the 24th of August/6th of September 2016.

Following a prayer allowed in such meetings, and the National Anthem of Jordan, His Beatitude Theophilos addressed participants in English, see link: https://en.jerusalem-patriarchate.info/2016/09/06/26263

Addresses were also delivered by the other three Chairmen of the MECC, namely Patriarch Aram of Cilicia, Patriarch Ignatius Youssef of the Roman Catholic Church and Bishop Munib Younan of the Lutheran Church.

Other heads of Churches also took the podium, e.g. the Patriarch of Alexandria, the Archbishop of Cyprus and Ecumenical Patriarch Bartholomew – the latter’s speech delivered by Metropolitan Benedictus of Philadelphia.

On the conclusion of the opening ceremony, deliberations began, regarding administrative issues, the assignment of roles, the setting up of Committees e.g. the Representation Committee for a four-year tenure, the Nomination Committee, Committee of Finances, Mass Media Committee etc.

The report of the MECC General Secretary, Fr. Michel Jalakh took the stage at the event and may be reached here: www.mecc.org

Along general lines, the report covered the current situation of the MECC, one of administrative and structural healing with the support of the Churches of the aforementioned Families towards repayment of debts, the conclusion of trials running against it, restoration of the donors’ trust, creation of a new website (www.mecc.org), the continuation of the dialogue between Christianity and Islam, and humanitarian help to Syrian refugees by means of the collaboration between the Patriarchate of Jerusalem and the Church of Cyprus, with the help of the Patriarchate’s Office in Amman, directed by Miss Wafa Goussous – who has hosted eight out of eleven meetings of the MECC Central Committee and General Assemblies.

Fr Jalakh extended his gratitude to all four Chairmen, as well as the King of Jordan, pointing out that the MECC remains the valid institution for the voice of Christians in the Middle East and their protection against manifestations of violence in the region and elsewhere, and towards reconciliation, peace and justice.

During the second session of deliberations, remarks, both positive and negative ones, were expressed in relation to the report, followed by addresses of partners and financial supporters.

The first day of deliberations closed with dinner hosted by Patriarch Theophilos of Jerusalem, having Prince Emir Ghazi as a guest. His Beatitude’s address, in English, may be reached here: http://www.jp-newsgate.et/en/2016/09/06/26265