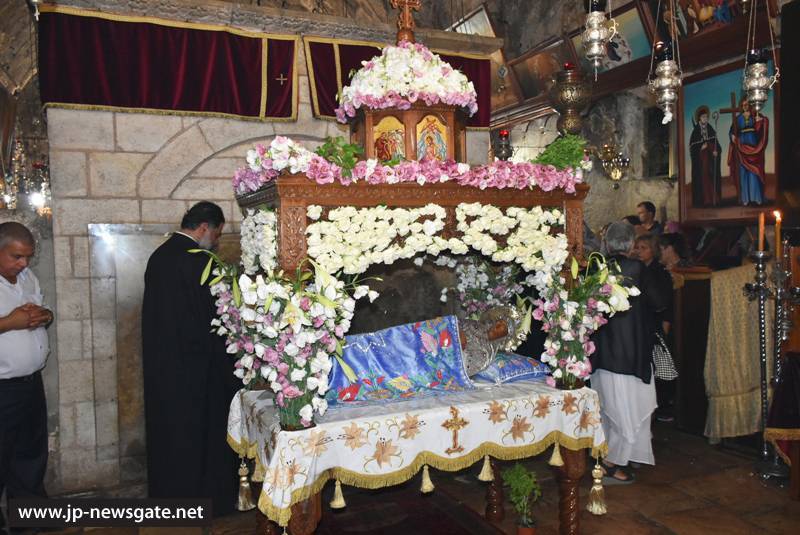 THE DORMITION OF THEOTOKOS CELEBRATED IN GETHSEMANE (2016)

On Sunday, the 15th/28th of August 2016, the Dormition of the All-Holy and Ever-Virgin Theotokos was celebrated at the Tomb of the Mother of God in Gethsemane.

This most glorious feast was led, in the evening, by Metropolitan Timotheos of Bostra, having Archimandrite Meletios as hieratic head. On the morning of the feast, His Beatitude Theophilos officiated, having as concelebrants Metropolitans Isychios of Kapitolias and Timotheos of Bostra, Archbishops Aristarchos of Constantina and Methodios of Tabor, as well as Metropolitan Joachim of Zambia, and several priests visiting from other Orthodox Churches. The choir sang in Greek, Arabic and Russian on the right, with Archimandrite Aristovoulos singing on the left. In attendance was the Consul-General of Greece to Jerusalem, Mr Christos Sofianopoulos, the representative of the Greek Government, Mr Terrence Quick, Deputy Minister to the Prime Minister, and a crowd of Christians from Israel and the occupied areas, the Village of the Shepherds-Beit Sahour, Bethlehem and Beit-Jala.

In His sermon, His Beatitude Theophilos said that the Church pays special honours to the Most Blessed Theotokos and Ever-Virgin Mary, because she became the par excellence vessel of the Holy Spirit, as attested by the Evangelist Luke: “And the angel answered and said unto her, The Holy Ghost shall come upon thee, and the power of the Highest shall overshadow thee” (Luke 1:35). “No one”, the Patriarch added, “can approach God but through Her and Christ the Mediator, who become God and her Son. Hence why the Melodist said: “A Virgin after giving birth and living after death, O Theotokos, you rescue your inheritance forever”. This inheritance is none other than the faithful people of God, those baptized Christians in the name of the Holy Trinity. “Those who are called may receive the eternal inheritance” according to Paul (Hebrews 9:15)” the Patriarch added.

On the conclusion of the divine Liturgy, Archbishop Dorotheos of Avila hosted participants to refreshments at the hegumeneion.