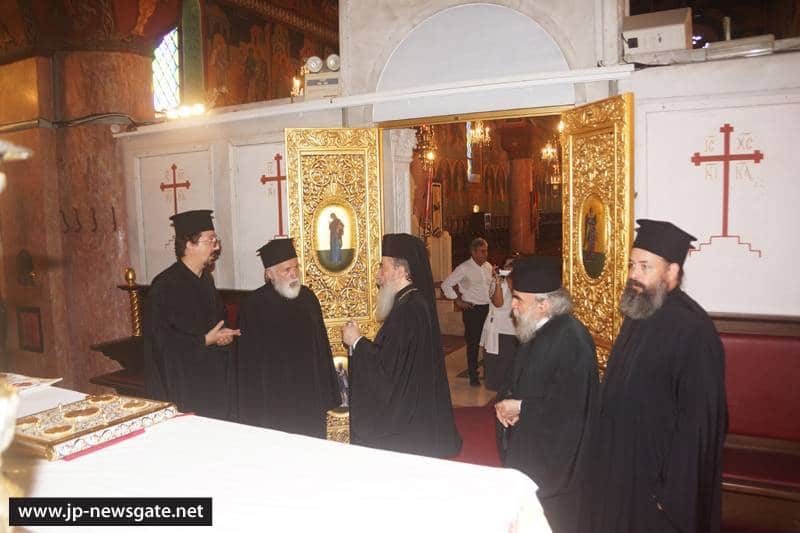 THE SECOND DAY OF HIS BEATITUDE’S VISIT TO RHODES

On Tuesday, the 13th/26th of July 2016, His Beatitude Theophilos, Patriarch of Jerusalem, aiming to promote the restoration works underway on the Aedicula of the Holy Sepulchre, with the agreement of the Franciscan Order, visited Santa Maria-Dormition of Theotokos Church in Rhodes. There, the Patriarch and His Entourage were warmly welcomed by the Franciscan Order’s representative, f. Loukas and his associates.

During the meeting, the Patriarch and f. Loukas stressed the need for collaboration amongst Churches against incidents of violence throughout the Middle East region. The need to complete restoration works on the Aedicula of the Holy Sepulchre was also pointed out, for the peace, hope and joy of pilgrims across the world.

Subsequently, His Beatitude, accompanied by Ms Moropoulou, visited the Venetian and Byzantine “Palace of the Magister” and the Byzantine and Venetian Church of Panagia at the Castle, the Metropolitan Church of the Annunciation and the Town Hall.

There, Patriarch Theophilos was warmly welcomed by Mayor F. Hatzidiakos and the Municipal Council. During their addresses, both His Beatitude and the Mayor stressed the ties between the Rhodians and the Holy Sepulchre, evident on the banner of the Holy Sepulchre kept at the Cathedral of the Annunciation of Theotokos together with banners of other Churches since 1963. This particular banner was used by the inhabitants of Symi during the launch of the 1821 Greek Revolution.

On the afternoon of the same day, His Beatitude met with Metropolitan Kyrillos of Rhodes at the Bishopric Palace, as well as with the Mayor and other personalities of the island.