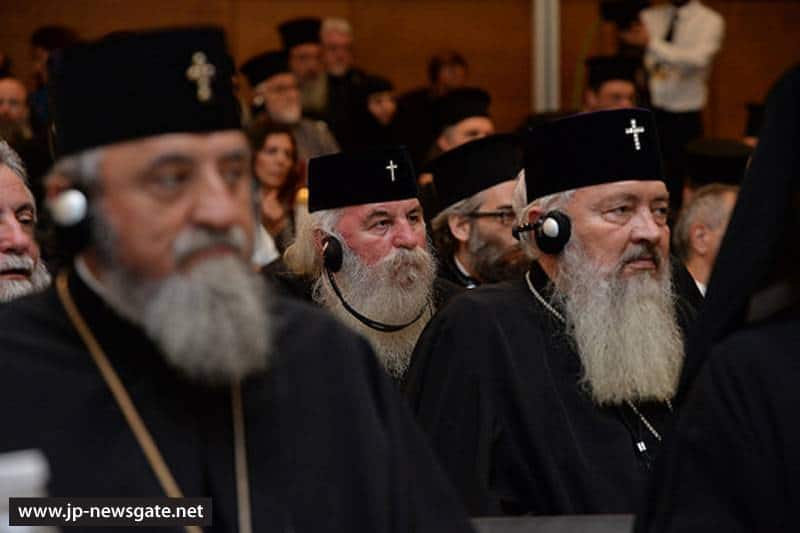 THE DELIBERATIONS OF THE GREAT SYNOD OF ORTHODOXY ON FRIDAY, 24 JUNE 2016

On the morning of Friday, the 11th/24th of June 2016, the Holy and Great Synod convened at a closed meeting to study, amend and finalize the Synod’s “Circular” and the text entitled “The relations of the Orthodox Church with the rest of the Christians”. The amendments of the two texts were then submitted to the Secretariat for recording and further discussion. On the conclusion of the proceedings of the Synod, the Orthodox Academy of Crete, founded by the late Metropolitan Irineos Galanakis of Kissamos and Selinos, presided over for several years by Mr Papaderos, and now headed by Metropolitan Amphilochios and presided over by Mr Zorbas, bestowed upon the Heads of Autocephalous Orthodox Churches the honorary titles of “partners”, with the exception of the Heads already honoured with the said distinction.

The distinction for His Beatitude Theophilos, Patriarch of Jerusalem, had been approved from as far back as 2006, but was held in abeyance. Based on the then decision of the Board of Directors, a diploma and a golden emblem were conferred on His Beatitude, Who went on to extend thanks, pointing out that the honour is reflected upon the entire Hagiotaphite Brotherhood, the spoken long ago Patriarchate of Jerusalem and the rest of the Holy Shrines.

On the conclusion of the event, the Orthodox Academy of Crete hosted to dinner the Heads of Churches and their Entourages as well as all participants in the proceedings of the Great Synod of Orthodoxy.