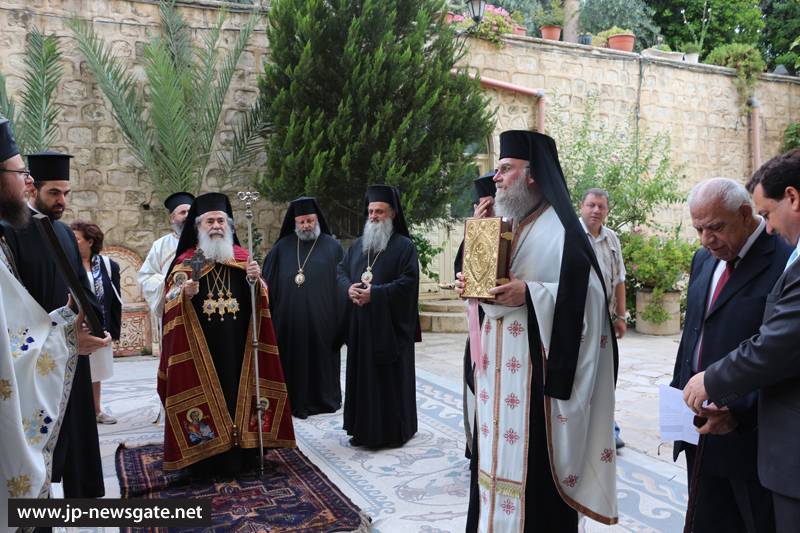 SUNDAY OF THE SAMARITAN WOMAN AT THE PATRIARCHATE (2016)

On Sunday, the 16th/29th of May 2016, the Patriarchate observed the feast of the Samaritan woman at Jacob’s Well in Nablus, Samaria.

The feast commemorates the meeting of our Lord Jesus Christ with the Samaritan woman at Jacob’s Well, which had been hewn by Jacob the patriarch between the mountains of Yeval and Yoresin.

After that meeting, the Samaritan woman believed in the Lord, both she and her house, as the Lord revealed to her that “He, who spoke with her, was the Messiah, Christ”. The event is related by the Evangelist John in the fourth chapter of his gospel.

In the church built over the Well by Archimandrite Ioustinos, dedicated to St Photini the Samaritan, the Hagiotaphite St Philoumenos had suffered a martyr’s death. There, His Beatitude Theophilos served the divine Liturgy on the day of the feast, having as concelebrants: Archbishops Aristarchos of Constantina, Demetrios of Lydda, and Philoumenos of Pella; Archimandrite Nektarios as leading priest, the hegumen of Raffidia, Archimandrite Leontios, the hegumen in the Village of the Shepherds, priests visiting from Greece, and Arabic-speaking priests from the nearby towns of Nablus. Elder nun Mariam sang in Greek, with hieropsalts in Arabic, in the presence of Consul-General, Mr Vasileios Koinis, and other members of the Greek Consulate. Residents of adjacent towns attended the service, as well as pilgrims from Greece, Russia, Ukraine and Romania.

To the pious congregation the Patriarch delivered a sermon in Greek, saying: “Today we celebrate the New Testament in the honest blood of Christ our Saviour, namely Pascha, the resurrection of Christ from the dead, so that “If anyone is in Christ, the new creation has come: the old has gone, the new is here!” (Corinthians 2, 5, 17) according to the Apostle Paul. This is why, when talking to the Samaritan woman, the Lord replied: “Everyone who drinks this water will be thirsty again, but whoever drinks the water I give them will never thirst. Indeed, the water I give them will become in them a spring of water welling up to eternal life” (John 4, 13). This spring of eternal life Christ has offered us through His crucifixion and resurrection. And this spring of eternal life did the Samaritan Woman recognize in the face of the Messiah”, His Beatitude said.

The divine Liturgy was followed by procession thrice around the Church, and the blessing of the Patriarch.

After the Apolysis, guests were hosted to a reception at the hegumeneion and, later, to festive lunch, courtesy of the monastery’s renovator, Archimandrite Ioustinos. During lunch, Halil Yanam of Zababdeh addressed His Beatitude in Arabic.