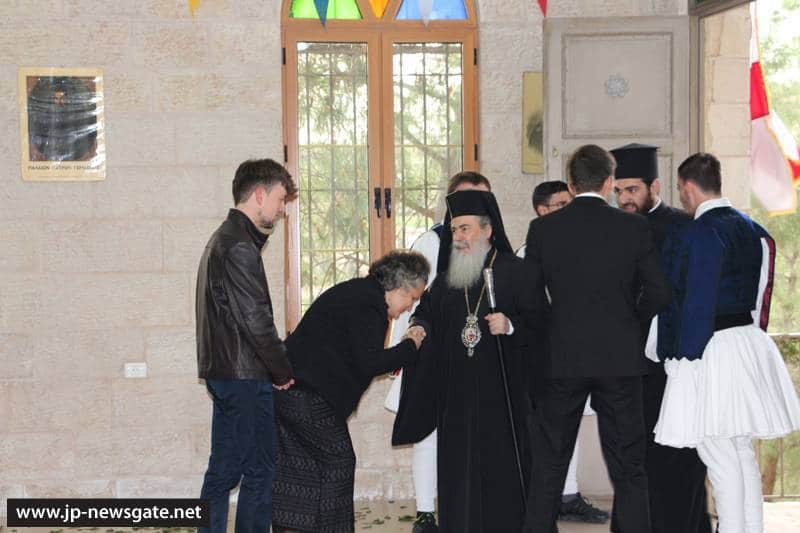 On the afternoon of Thursday, the 11th/24th of March 2016, the anniversary of Greece’s national day of the 25th of March 1821 was celebrated at the hall of events of the Patriarchal School on the Holy Sion.

The ceremony was honoured by the presence of H.B. Theophilos, Patriarch of Jerusalem. The Patriarch was accompanied by the President of the School Board, Elder Sacristan, Archbishop Isidoros of Hierapolis; the Patriarchal Commissioner, Metropolitan Isychios of Kapitolias; the Exarch in Constantinople, Archbishop Nektarios of Anthedon; the Master of Ceremonies and Assistant Dragoman, Archimandrite Bartholomew, numerous Hagiotaphite Fathers, and teachers at the School. The Greek Consul-General to Jerusalem and his wife attended the celebrations with Mr Vasileios Koinis and other employees of the Greek Consulate, monks, nuns, members of the Greek parish and pilgrims.

The celebrations for the Greek national day included panegyric speeches by Scholarch Nikolaos Souliotis and philologist Christos Kontogiannis, videos on the foundation of the ‘Society of Friends’, the preparation for the fight by A. Ypselantis, and the launch of the war by Germanos of Old Patras, poems and songs on the 1821 Greek Revolution, a play about the operation of the ‘Secret School’, and the National Anthem.

In his opening address, Mr Souliotis referred to the symbolism of the 25th of March, the day on which Christianity celebrates one of its greatest feasts. “The message”, Mr Souliotis said, “of soulful redemption carried by the Archangel into the conscience of the slaves, became identified with the message of the Revolution for national liberation. This holy day inscribed in gold the word Freedom onto the consciences of Greeks and others. A handful of people ignorant of war dared to stand against the organized army of the Turks, their only weapon being a brave soul and valiance”.

Mr Kontogiannis delivered the panegyric of the day, followed by patriotic songs, recitation of poems, video projections and plays performed by the students.

The adversities suffered by the Greek race as a result of a 400-year Turkish occupation, were commemorated at the event: persecutions, confiscation of properties, deprivation of elementary human freedoms, murders, abductions and other acts of inhumanity and barbarity.

Special reference was made to acts of bravery and heroism by the fighters of the Revolution, since its launch by Archbishop Germanos and throughout its course: Kolokotronis, Athanasios Diakos, Hierodeacon Papaflessas, Karaiskakis, Miaoulis, Kanaris, general Ypselantis and unknown men who sacrificed their lives in Souli, Mesolongi, Psarra and other regions of the Peloponnese, Continental Greece and the Aegean Islands, until the Sea Battle of Navarino in 1834 and the liberation of Greece as a free state.

Moved by the Revolution’s patriotic spirit, the Patriarch and the Consul-General congratulated contributors to the celebration and wished students progress and success in their duties.