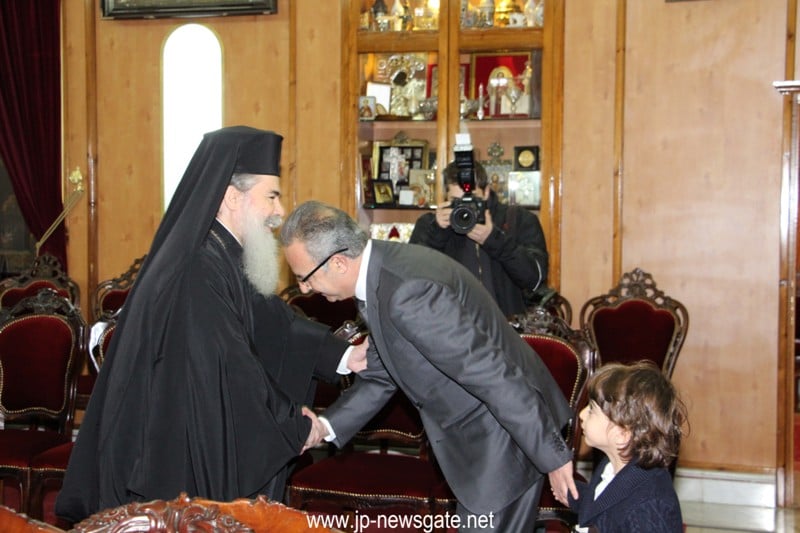 On Monday, the 29th of December 2015/11th of January 2016, Mr Averof Neophytou, president of Cyprus’ “Democratic Rally”-DISY party, and Chairman of the Parliamentary Committee on European Affairs, in the context of a political visit to Israel, visited the Patriarchate. He was accompanied by his esteemed wife, political associates and the Ambassador of the Republic of Cyprus to Israel, Ms Thessalia Siambou.

Mr Neophytou was received by His Beatitude Theophilos, Patriarch of Jerusalem, in the presence of Hagiotaphite Fathers.

At the meeting, the Patriarch congratulated Mr Neophytou on the statements he made after meeting with the Israeli President and his counterpart, Mr Tzachi Hanegbi, for peace and the resolution of the Cyprus problem in justice for a unified Cyprus. His Beatitude also spoke of the harmonious relations between the Patriarchate of Jerusalem and Cyprus through the centuries, as well as of Cypriot Hagiotaphites i.e. St Philoumenos the Neomartyr. The apex of such harmonious relations has been the reopening of the Patriarchate’s Exarchate in Nicosia.

On his part, Mr Neophytou thanked His Beatitude for the Patriarchate’s support of the Church and State of Cyprus, and His contribution to the preservation of different cultures and religious convictions in the region of the Holy Land and the Middle East. Mr Neophytou closed by saying His Beatitude is the symbol of such coexistence envisioned for Cyprus too.

Mr Neophytou went on to offer the Patriarch an Album on the History of Cyprus by Mr Karageorghis and the emblem of the Cyprus Parliament. The Patriarch offered Mr Averof a blessing cross and an icon of Theotokos Jeusalemite. Pectoral crosses were offered to his wife and son.

On the conclusion of the meeting, His Beatitude Theophilos and Mr Neophytou made joint statements to the Cyprus press (see video link below).