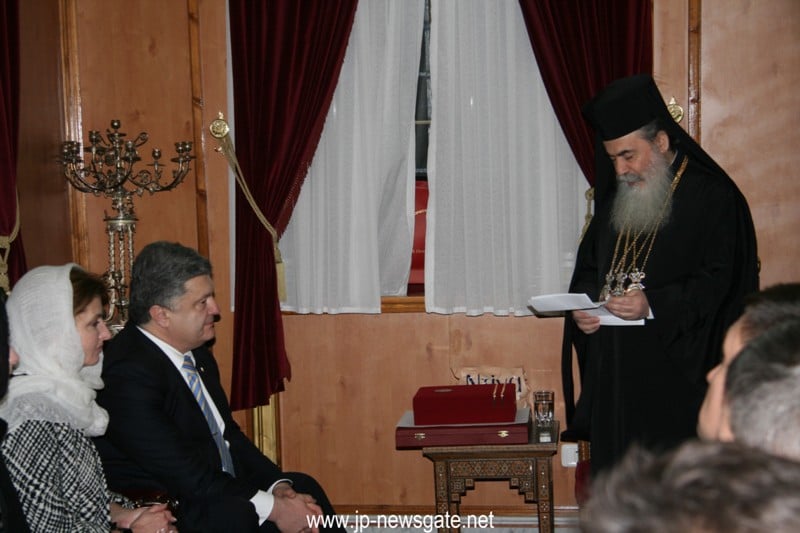 THE UKRAINIAN PRESIDENT VISITS THE PATRIARCHATE

On the evening of Wednesday the 10th/23rd of December 2015, the President of Ukraine, Mr Petro Poroshenko, on a visit to the state of Israel, visited the Patriarchate. He was accompanied by his esteemed wife and three children, the Ukrainian ambassador to Israel, Mr Hennadii Nadolenko, and a group of his political associates.

At David’s Gate, the President was met by the Patriarchal Commissioner, the Most Reverend Isychios, Metropolitan of Kapitolias, and the Assistant Dragoman and Master of Ceremonies, Archimandrite Bartholomew.

His Excellency the Ukrainian President and his entourage were welcomed at the Patriarchate by Patriarch Theophilos of Jerusalem and Hagiotaphite Fathers.

At the meeting, His Beatitude addressed Mr Poroshenko in English, see link: https://en.jerusalem-patriarchate.info/2015/12/23/19029

In recognition of his services to his nation, his support of the Church of Jerusalem and his contribution to the unity of his state, Patriarch Theophilos bestowed upon Mr Poroshenko the Great Cross of the Equestrian Order of the Holy Sepulchre and an icon of Panagia Jerusalemite. Gold pectoral crosses were offered to the President’s wife and three children.

His Excellency the President offered the Patriarch an alabaster lamp, whilst the Patriarch offered the Head of Protocol, Mr Boris Sloskin, a nine-branched candelabra. To entrepreneur Mr Feldman Alexander, and other members of the presidential entourage, He offered Jerusalemite eulogias.

On the conclusion of his visit and after signing the guestbook, Mr Poroshenko, accompanied by the Patriarch, went on to venerate at the Church of the Resurrection, the Apokathelosis, the Holy Sepulchre, the Golgotha and the Sacristy, where he was welcomed by the Elder Sacristan, His Eminence Isidoros, Archbishop of Hierapolis. There, Archbishop Isidoros wished the President that the goals of his government be met by the grace of the Holy and Life-giving Sepulchre.