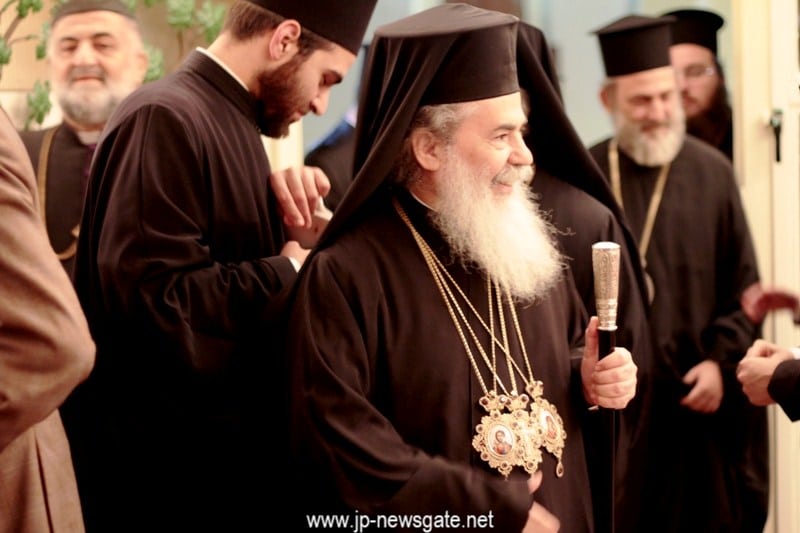 THE PATRIARCHATE OF JERUSALEM HOLDS EVENT FOR SYRIAN REFUGEES

On the evening of Saturday, the 29th of November/12th of December 2015, the Patriarchate’s Amman Office of the Middle East Council of Churches (MECC) organized a charity dinner with the aim of securing financial aid for Syrian refugees, as two millions of them reside in refugee camps in Jordan.

Heading the event was the Director of the aforementioned Amman Office, Ms Wafa Gousous.

Patriarch Theophilos of Jerusalem honoured the event with His presence. He was accompanied by Archbishop Aristarchos of Constantina, Metropolitan Joachim of former Zambia, the Patriarchate’s Liaison with Arabic-speaking media, f. Issa Mousleh, the Hegoumen in Fhes, Archimandrite Ieronymos, and Archdeacon Evlogios. Diplomatic representatives of Russia, Japan and other countries attended the event, as well as the Secretary-General of the MECC, f. Michel Jalakh, the representative of the Patriarchate of Antioch to the MECC, f. Samer Lahham and others.

The event, that followed a similar charity organized by UCLAN Cyprus University under the title Christian Experience, was attended by many eager to contribute in favour of refugees.

Addresses were also made by the Secretary-General of the MECC, the Head of the Armenian Catholic Church, and Ms Wafa Gousous.

After dinner, guests visited an exhibition featuring items made by refugees and their children. Proceeds from the sale of items will be used for the financial support of refugees.