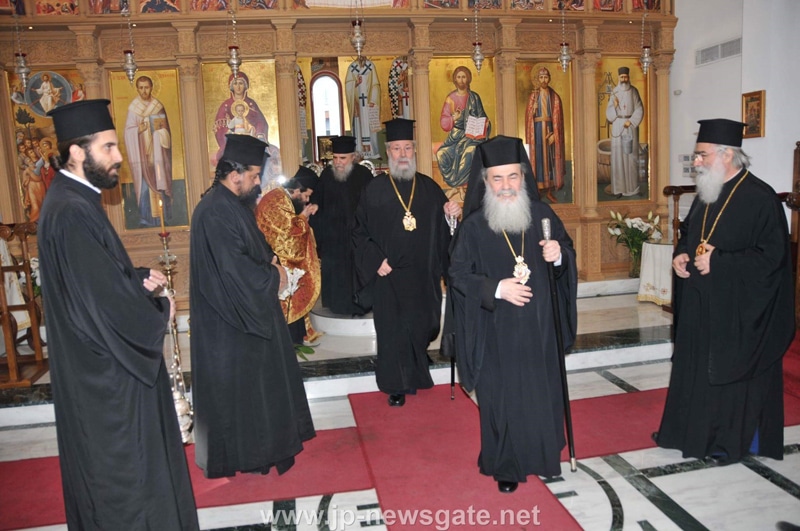 On Wednesday the 18th of November/2nd of December 2015, UCLAN University hosted a humanitarian event with the aim of providing financial aid to Syrian refugees. The event was held at the University’s Hall of Events.

His Beatitude Theophilos, Patriarch of Jerusalem, was invited by Mr Floros Voniatis, President of the University’s Board, to participate in the event. He was accompanied by Metropolitan Timotheos of Vostra, the Holy Sepulchre’s Exarch in Cyprus, Archbishop Aristarchos of Constantina, and Archdeacon Evlogios.

On His arrival at Larnaka airport, the Patriarch was welcomed by Archbishop Chrysostomos of Cyprus, Metropolitan Timotheos of Vostra, Archimandrite Ieronymos Pyliotis, a close collaborator of UCLAN, and other Cypriot clerics.

From the airport, His Beatitude went to the Exarchate in Nicosia, where the Exarch hosted lunch in honour of the Patriarch and the Archbishop of Cyprus.

The “event for love” opened with an address by Mr Voniatis, who underlined the highest scientific level of UCLAN University and went on to add that, during a visit to Jordan, he had witnessed how the Patriarchate of Jerusalem supported the displaced from Syria, now residing at the Za atar refugee camp. That visit provided the inspiration for the event at UCLAN, he said.

In His address to participants, Patriarch Theophilos characterized UCLAN’s initiative kind and well-liked by god, adding that the Church of Jerusalem, being an undeniable witness of our Saviour’s philanthropy, has never ceased to care for those in need, in alignment with the words of the Apostle Paul: If one part suffers, every part suffers with it; if one part is honoured, every part rejoices with it. (Corinthians A, 12, 26)

“The establishment of Academic Institutions in Cyprus, i.e. the Theological School founded on the initiative of Archbishop Chrysostomos, and UCLAN University on the initiative of Mr Voniatis, opens up new paths of closer collaboration between Cyprus and the Patriarchate of Jerusalem in the field of education, to the benefit of peoples in the wider region and Christians as a whole”, said Patriarch Theophilos.

Her address was followed by church hymns performed by the Choir of the Bishopric of Kition, under the direction of Mr Andreas Avraam Vavis. Traditional Cypriot songs and dances were also performed.

The event closed with the Philharmonic Choir of the Bishopric of Tamassos, under the blessings of its shepherd, Metropolitan Isaiah, and the direction of Mr Charilaos Nikolaides.