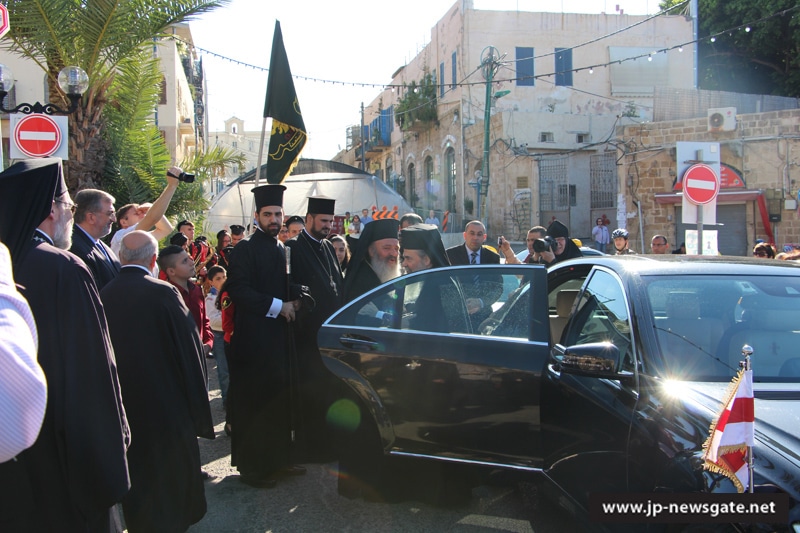 THE GATHERING OF THE HOLY APOSTLES CELEBRATED IN JOPPA

On Saturday, the 8th/21st of November 2015, the Patriarchate observed the feast of the Gathering of the Apostles Michael and Gabriel and all the heavenly Bodiless Powers in the city of Joppa, at the homonymous Monastery by the sea. The divine Liturgy was led by His Beatitude Theophilos, Patriarch of Jerusalem. Co-officiating were: Metropolitan Kyriakos of Nazareth; Archbishops Damascene of Joppa, Aristarchos of Constantina, Nektarios of Anthedon; Metropolitan Joachim of former Zambia; Hieromonks as Archimandrite Ieronymos, hegoumen in Fhes, Jordan; Archimandrite Bartholomew, Archimandrites Alexandros and Leontios of the Russian MISSIA in Jerusalem; Archimandrite Nephon, Archdeacon Evlogios, Hierodeacon Markos and Archimandrite Timofti of the Monastery of the Archangels. Head cantor Mr Martinakos, invited by the Archbishop of Joppa, sang on the right in Greek whilst the Choir of Joppa sang in Arabic. In attendance were the Greek ambassador to Israel, Mr Spyridon Lamprides, the Ambassador of Cyprus and other diplomats.

To the pious congregation His Beatitude preached the Word of God in Greek.

The divine Liturgy was followed by reception at the hegoumeneion, then by lunch hosted by Archbishop Damascene of Joppa.