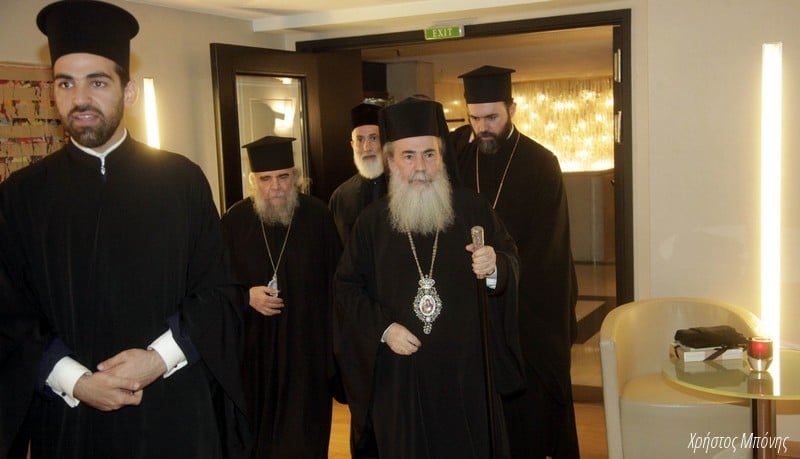 On Sunday, the 5th/18th of October 2015, H.B. Theophilos, Patriarch of Jerusalem, accompanied by Archdeacon Evlogios and Ms Anna Koulouri, flew from Tel Aviv to Athens on Aegean Airlines, in order to participate in the International Conference organized by Greece’s Ministry of Foreign Affairs entitled “Religious and Cultural Pluralism and Peaceful Coexistence in the Middle East” (Athens, 18-20/10/1015). The Patriarch was invited by the Greek Foreign Minister, Mr Nikolaos Kotzias.

Upon His arrival at Athens Airport, the Patriarch was welcomed by Mr Eliades and Mrs Stamateli, representing the Foreign Ministry, Master of Ceremonies Mr Zavelakis, the Most Reverend Nikolaos, Metropolitan of Mesogaia and Lavreotiki, Archimandrites Patrikios and Ignatios, the Elder Secretary-General, Archbishop Aristarchos of Constantina, and the Exarch of the Holy Sepulchre in Greece, Archimandrite Damianos.

From the airport, H.B. was driven to the Hotel where the Conference would take place.

The Conference aimed to look at manners in which peace could prevail in the countries of the Middle East, suffering now as well as before by incidents of merciless violence causing misery, expatriation and even the death of individuals and groups. Invited to the Conference was Ecumenical Patriarch Bartholomew, His Beatitude Theodore, Pope and Patriarch of Alexandria, His Beatitude John, Patriarch of Antioch, His Beatitude Chrysostomos, Archbishop of Cyprus, and the representatives of the Inter-Orthodox Interparliamentary Assembly.

The deliberations of the Conference began on the evening of Sunday the 5th/18th of October 2015 with a dinner hosted by the Interparliamentary Assembly of Orthodoxy.

In the course of dinner, guests extended thanks for participating in such a meeting that was set to look at unprecedented incidents of violence forcing all of us to feel that we are on the same boat with the refugees who risk their very lives crossing the Mediterranean. In fact, it was proposed that such occurrences call for more frequent meetings of this particular kind.