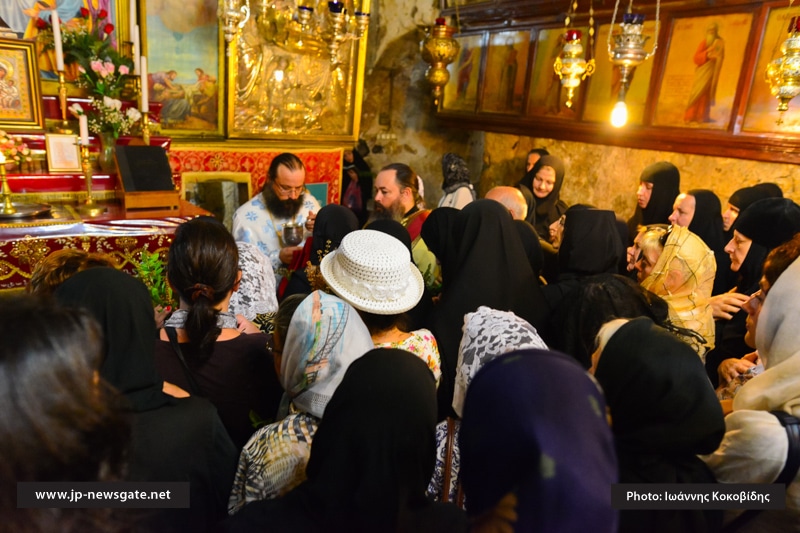 RETURN OF THE ICON OF THEOTOKOS TO THE DEPENDENCY OF GETHSEMANE

On Saturday the 23rd of August/5th of September 2015, the Icon of Theotokos was carried in procession to the Dependency of Gethsemane, opposite the Court of the All-holy Church of the Resurrection.

The ceremony began after a Divine Liturgy at the Tomb of the Mother of God, in Gethsemane.

On the conclusion of the Liturgy, the Hegounen at Gethsemane, Archimandrite Nektarios, held the Icon of the Dormition of Theotokos, that was kept for nine days to the south of the Tomb of the Mother of God, and led the procession. Hagiotaphite Hieromonks, monks, nuns, locals and pilgrims from Orthodox Countries, walked before him.

The faithful stood on either side of the streets, that were decorated with flowers, to venerate the icon.

At the crossing between Christian Street and the Patriarchate’s Street, His Beatitude Theophilos, Patriarch of Jerusalem, proceeded to venerate the icon, together with Hagiotaphite Fathers and the Greek Consul-General to Jerusalem, Mr Georgios Zacharoudiakis.

The procession continued until the Court of the Church of the Resurrection opposite which, at the Dependency of Gethsemane, the icon of Theotokos was returned to its position, on the Chapel’s icon-stand, to guard the Hagiotaphite Fraternity and all Orthodox honouring it.