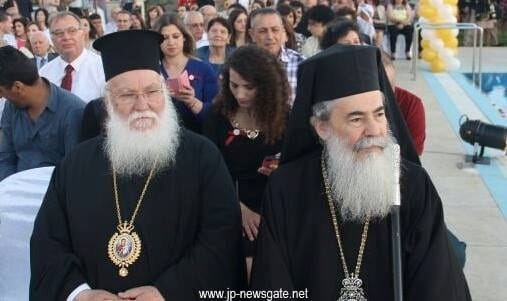 On the afternoon of Saturday, the 7th/20th of June 2015, His Beatitude Theophilos, Patriarch of Jerusalem, visited the town of Kufr Yaseef in Northern Israel. The Arabic-speaking community there recently founded a school for 300 elementary and high school students, by the subvention of the Patriarchate. The Patriarch was accompanied by Metropolitan Kyriakos of Nazareth, the Elder Secretary-General, Archbishop Aristarchos of Constantina, the President of the Patriarchate’s Arabic Schools in Israel, Archimandrite Ieronymos, the Arabic-speaking media liaison, Protopresbyter Issa Mousleh, and Archimandrite Paisios, visiting from Mount Sinai.

The purpose of this pastoral visit was the presentation of diplomas to the forty graduates of the ninth grade.

The graduation ceremony took place in a lavish green area of the adjacent town of Melia.

The Patriarch was warmly welcomed to this well-organized ceremony that began with a parade of the graduates and went on with addresses by the School Principal, Protopresbyter Theodosios Mahoul, the Music teacher, and representatives of students in Greek, Arabic, English and Polish. Father Issa Mousleh read the Patriarch’s address in Arabic, before He awarded diplomas to the students, with wishes for progress in their lyceum studies.

On the conclusion of the ceremony, the Community hosted the Patriarchal retinue to dinner.