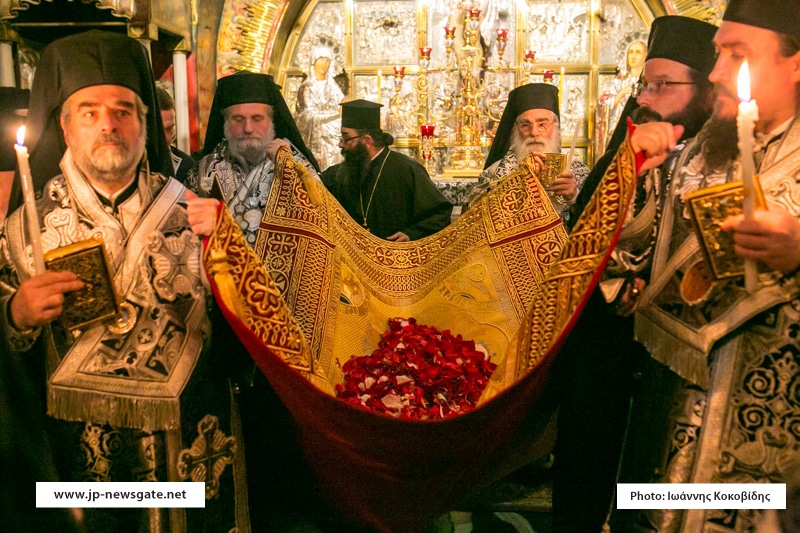 THE PROCESSION OF THE EPITAPH AT THE PATRIARCHATE

On the evening of Holy Friday, the 28th of March/10th of April 2015, the magnificent procession of the Epitaph took place at the Church of the Resurrection in commemoration of the Burial and Descent into Hades of Our Lord Jesus Christ.

The procession was led by Patriarch Theophilos of Jerusalem, with co-officiating Hagiotaphite Primates, and Archbishop George of Siemiatycze, Poland, Hieromonks and Hierodeacons. Archimandrite Aristovoulos sang on the right with Monk Joseph of Mount Athos singing on the left, in the presence of a great crowd of faithful from Greece, Cyprus, Russia, Ukraine and Romania, praising God for delivering His Son to death for our salvation.

The service began at the Katholikon. Once the Patriarch, Primates and Priests had put on their mourning vestments, the procession began along the shrines.

From Adam’s shrine, the procession proceeded to the Golgotha, where the Gospel of the Crucifixion was read, after which the “Heileton”, symbolizing the Lord’s deposited body, was placed on the Holy Apokathelosis, where Joseph of Arimathea and Nicodemus with the Myrophorae had placed the Lord’s body.

From there, Primates carried the “Heileton” thrice around the Holy Sepulchre, after which the three Stases of the Lamentations of the Epitaph were sung as Archbishop Theophanes of Gerassa performed a censing, and Archbishop Aristarchos of Constantina delivered a speech in Greek (see video).

At the conclusion of the service, after midnight, the Patriarchal Hagiotaphite Retinue proceeded to the Patriarchates, as surveillance measures had already been put in place by the Israeli Police in view of the Holy Light Ceremony of the following day, Holy Saturday.