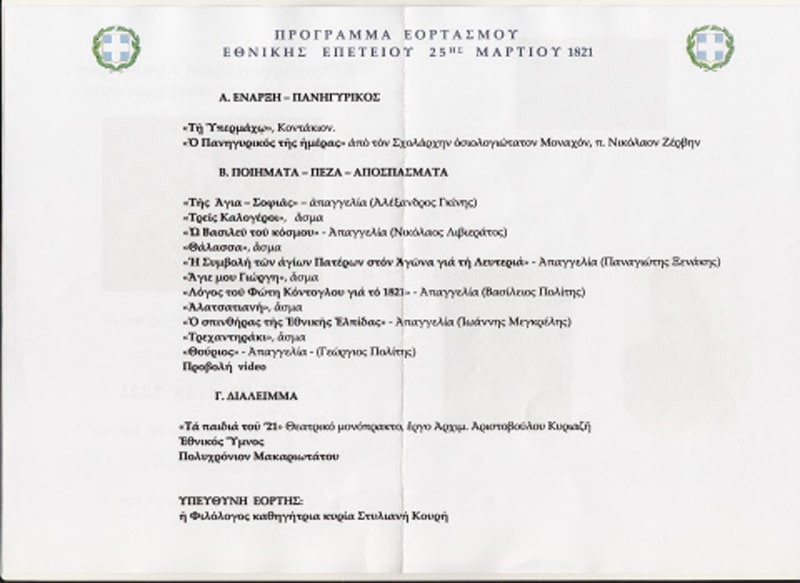 On the afternoon of Wednesday, the 12th/25th of March 2015, the anniversary of the Greek Independence Day, namely the 25th of March 1821, was celebrated at the Patriarchal Hieratical School of the Patriarchate, on the hill of St Sion.

The celebration was attended by Patriarch Theophilos of Jerusalem. His Beatitude was accompanied by the Patriarchal Commissioner, Metropolitan Isychios of Kapitolias; the Elder Secretary General, Archbishop Aristarchos of Constantina, the Elder Sacristan and President of the School Board, Archbishop Isidoros of Hierapolis, the Greek Consul-General to Jerusalem, members of the Greek Parish of Jerusalem, Hagiotaphite Fathers and nuns.

The ceremony included the day’s panegyric speech by the Principal, f. Nikolaos Zervis, recitation of poems, a play and patriotic songs.

Poems and songs alike showcased the sufferings of the Greek nation – persecutions, deprivation of religion and other freedoms, decapitations, seizure of ownership – and its resilience with the aid of the Church, the Great Teachers of the Greek People and the Secret School. The Fathers of the Nation, Germanus, Bishop of Old Patras, Kolokotronis, Karaiskakis, Papaflessas, Kanaris and other fighters sacrificed all they had for the freedom of the Greek race. After eight years of relentless struggling, freedom was achieved by God’s help, and the establishment of the new Greek State followed in 1832.

Before the end of the ceremony, both the Patriarch and the Greek Consul-General congratulated the Principal, teachers and students at the School for a successful celebration of the Greek national day.