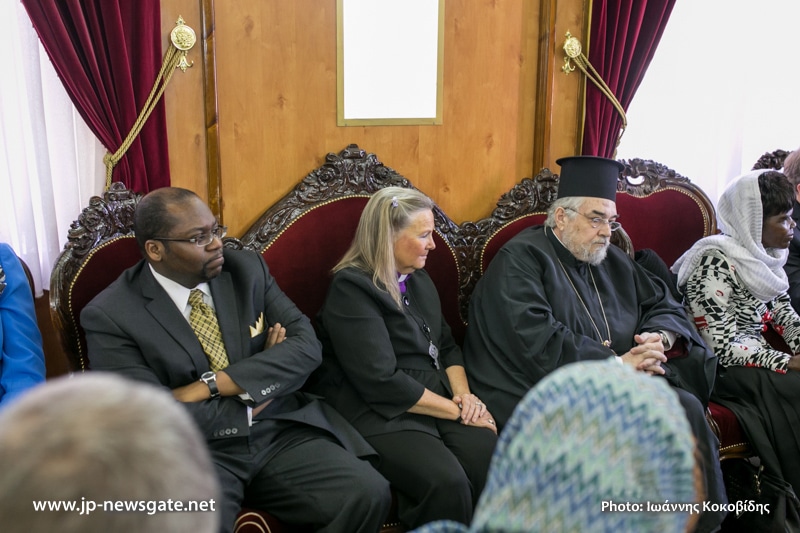 On the Second Sunday of the Great Lent, the 23rd of February/8th of March 2015, a ten-member Delegation of the World Council of Churches, under its Secretary-General, Rev. Dr. Olav Fykse Tveit and its Vice Moderator, Metropolitan Gennadius of Sassima, of the Ecumenical Patriarchate, the Deputy Secretary-General, Mr Georgios Laimopoulos, and: Dr. Agnes Abouom, moderator, Bishop Mary Ann Swenson, vice moderator, Dr. Isabel Phiri, Ms Marrianne Ejdersten and Mrs Elaine Dykes, visited the Patriarchate whilst on a visit to the Holy Land, Israel and Palestine.

The Delegation was received by Patriarch Theophilos of Jerusalem, in the presence of Archbishop Aristarchos of Constantina, the Assistant Dragoman, Archimandrite f. Bartholomew, and other Hagiotaphite Fathers.

In the context of the meeting, an interesting discussion took place on the current political instability in Jerusalem and the rest of the Holy Land on the aftermath of incidents of violence; also, on the need to jointly carry on the peacemaking, conciliatory work of the Churches.

It was precisely in support of this work that the Delegation came to the Holy Land for a pilgrimage, as pointed out by the Council’s Secretary-General and moderators. Addressing the guests, His Beatitude said that Churches struggle to maintain the religious character of Jerusalem and urge its residents to emulate the holiness of the events that had occurred on the Holy Land. This holiness is also pursued by the members of the Delegation over their pilgrimage.

His Beatitude also referred to efforts undertaken by the Patriarchate toward the reorganization and upgrade of the Middle East Council of Churches that have so far been met with success.

The Council, He said, is a means of expression for the voice of Christians. Also significant for the promotion of peace is the Council of the Religious Institutions of the Holy Land, which brings together Christian, Jewish and Muslim politicians as well as the religious representatives of the three Monotheistic religions towards a resolution of the political problem in the Middle East. In terms of the exploitation of religion as a weapon of political conflict, it was said at the meeting that religion must be used against this phenomenon and in favour of the prevalence of peace. Jordan also participates in this effort.

It was suggested, at the meeting, that one of the future conventions of the Central Committee of the World Council of Churches take place in Jerusalem.

The Delegation went on to continue its pilgrimage in the Basilica of the Nativity in Bethlehem, where it was received by the Patriarchal Commissioner, Archbishop Theophylaktos of Jordan. At noon, they were hosted to lunch offered by His Beatitude at St Gabriel Hotel.