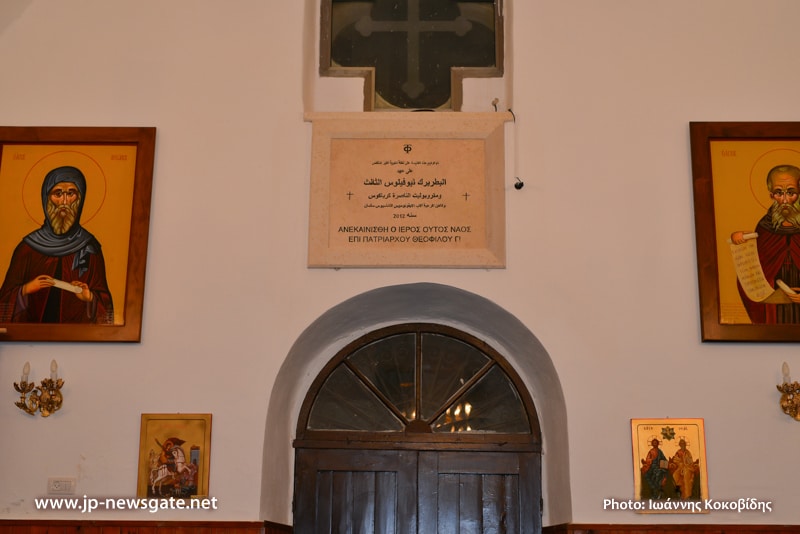 HIS BEATITUDE, THE PATRIARCH OF JERUSALEM, LEADS SECOND SALUTATIONS IN EILABUN

On the evening of Friday, 21 February/6 March 2015, H.B. Theophilos, Patriarch of Jerusalem, led the service of the Salutations of Theotokos at the Monastery of St George, of the Patriarchate’s Rum Orthodox Arab-speaking Community in Eilabun, Northern Israel.

In this town, of a population of approximately 3.000, the Rum Orthodox Community numbers 600 members. Here, St George Church has been renovated at the expenses of the Patriarchate, under the supervision of Archimandrite Hilarion, Hegoumen at the Monastery of the Transfiguration on Mount Tabor.

His Beatitude was warmly received by Metropolitan Kyriakos of Nazareth, Archimandrite Hilarion, priests of the Bishopric of Nazareth, the caretaker of the Monastery of Capernaum and members of the Community.

The Patriarch led the Second Stasis of the Salutations. Co-officiating were Metropolitan Kyriakos of Nazareth and Archbishop Aristarchos of Constantina. Before the apolysis, His Beatitude spoke to the congregation in Arabic, see link: https://en.jerusalem-patriarchate.info/ar/2015/03/05/10753

On the conclusion of the service, His Beatitude and retinue were hosted to a meatless reception.

On the occasion of His visit, Patriarch Theophilos offered icons to all the faithful, as well as financial aid to be used for the renovation of the Church.

THE FEAST OF THE APODOSIS OF PASCHA AT THE PATRIARCHATE