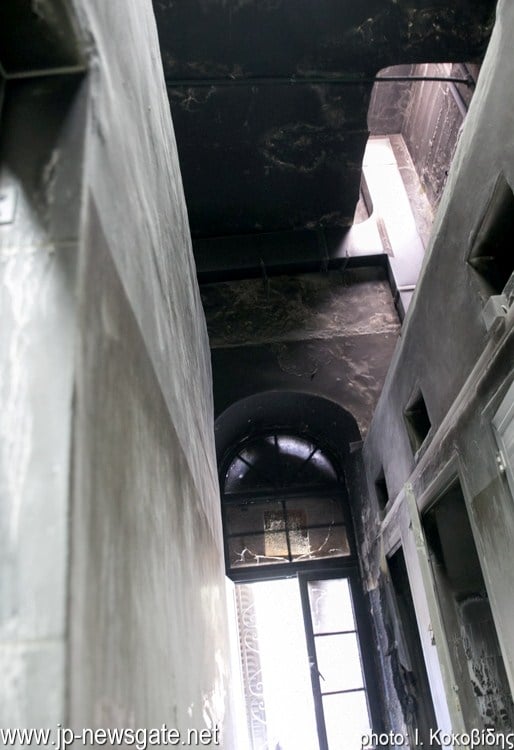 At 4:00 am of Thursday the 13th/26th of February 2015, two unknown masked men deposited burning material in the building of the Patriarchal Hieratical School of St Sion through a bathroom window in the east wing which is adjacent to the Patriarchate’s cemetery.

The complex, which includes the Church of the Holy Trinity, houses the Hieratical School and the boarding house for high school and lyceum students trained to join the Hagiotaphite Brotherhood.

The fire was perceived by the Israeli Police and Fire Department which rushed to extinguish it, thus preventing human losses. Damages have been caused to the building, including profane graffiti sprayed on the walls.

Similar violations and attacks, though not arson, were committed over the past two years by extreme Israeli elements in the outer area of the School, namely the open-air Chapel and the playing field from where two hundred saplings, offered by Keren Kayemeth, Israel, were uprooted.

This recent attack has been recorded on the School’s video camera. The Director of the Boarding House, Hierodeacon Dionysios, who was asleep at the time of the arson, notified the Patriarchate of the incident.

His Beatitude Theophilos, Patriarch of Jerusalem, travelled to the scene in the morning, accompanied by Archbishop Aristarchos of Constantina, Archbishop Demetrios of Lydda and other Hagiotaphite Fathers, as well as the Greek Consul-General to Jerusalem. The Israeli Police was there during the visit, in order to pursue investigations of the offence. Also present was the representative of the Israeli Ministry of Public Safety, Mr Mordechai Zaken.

The Patriarchate unequivocally condemns this unacceptable act of violence against the School on the Hill of the Holy Sion, whence the first Church of the world set out, and keeps praying and acting towards religious conciliation and coexistence in the Holy Land.

The incident was announced on the morning of the aforementioned day on the Israeli Radio, after which the Elder Secretary-General was asked to provide further information on the event.

Within the day, the Patriarchate received expressions of support by friends of peace. The Israeli President, Mr Reuven Rivlin, condemned this act of persecution during a telephone conversation with His Beatitude. Representatives of the Jerusalem Center for Jewish-Christian Relations (JCJCR), both rabbis and laymen, extended their support to the Patriarch, whereas the American Consul-General to Jerusalem made a personal visit to the Patriarchate.