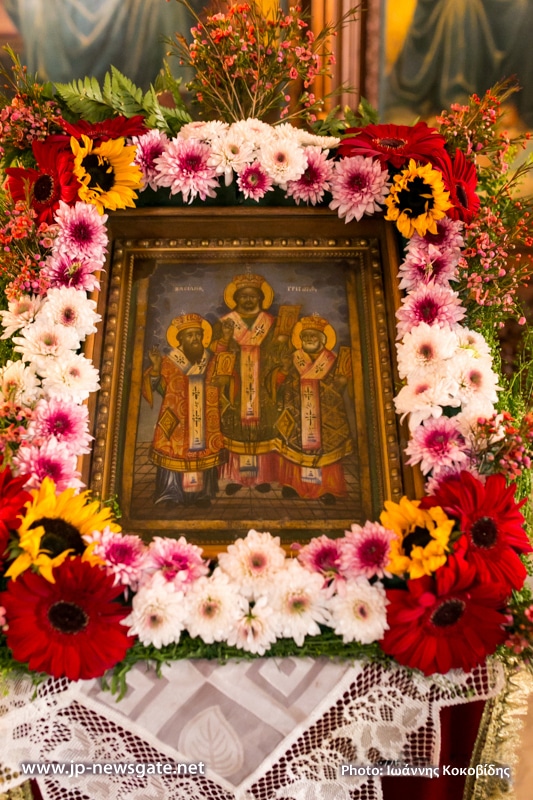 THE FEAST OF THE THREE HIERARCHS CELEBRATED AT THE PATRIARCHAL SCHOOL

On Thursday, the 30th of January/12th of February 2015, the Patriarchate celebrated the memory of the Three Holy Hierarchs, John Chrysostom, Basil the Great and Gregory the Theologian. This feast, honouring the ministry of teaching, was celebrated at the Patriarchal School on the hill of the Holy Sion.

The feast was established by the Church in the 12th century in order to unite its members – then separated into fractions with partisans of St John, St Basil and St Gregory – into a single body honouring the three ecumenical teachers both as saints and as men of letters promoting the link between ancient Greek education and Christian teachings.

Vespers and the Divine Liturgy were held in the Church of the Holy Trinity on the Holy Sion, led by the Chairman of the School Board, Elder Sacristan, His Eminence Isidoros, Archbishop of Hierapolis. Co-officiating with him, were Presbyter Efthymios and Hierodeacon Dionysius.  Teachers and students sang in the presence of a pious congregation made of members of the Greek Parish of Jerusalem and pilgrims.

Mr Mexis delivered the panegyric of the day (see video).

After mass, Vice-Principal, Mr Spyridon Mwxis, hosted the Prelatic retinue and the congregation to a reception at the School’s hall of events.