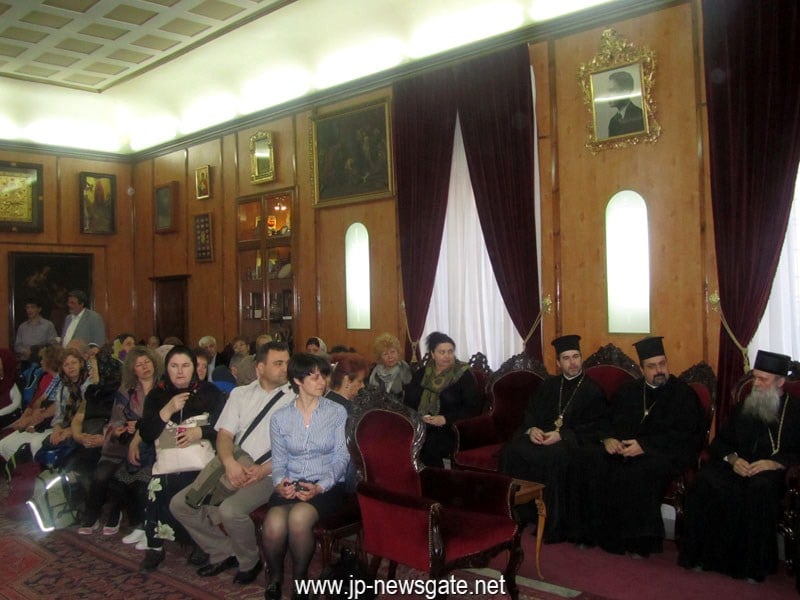 On Monday, the 20th of January/2nd of February 2014, His Eminence Arsenios, Metropolitan of Austria, heading a group of Orthodox pilgrims from his congregation, as well as members of other Churches in Austria, Hungary, Germany and France, visited the Patriarchate.

Metropolitan Arsenios and the group of pilgrims were welcomed by Patriarch Theophilos in the presence of Hagiotaphite Fathers, after they had already visited most of the holy shrines and the Monastery of St Catherine in Sinai.

At the meeting, His Beatitude talked of the Lord’s ongoing redeeming work through His Incarnation, Crucifixion and Resurrection on the sites now visited by pilgrims as witnesses of the work performed for their salvation.

The Church of the Holy Land attests the work of God for man on these sites, through deprivation and sacrifice. “This work”, the Patriarch pointed out, “is enhanced by the presence of pilgrims like you, hence why we congratulate Metropolitan Arsenios for his pastoral contribution that we ourselves had witnessed two years ago on a visit to Hungary”.

Bishop John, representing the Patriarchate of Serbia to Croatia, was also present at the meeting.

Metropolitan Arsenios thanked His Beatitude for His words, adding that “the Orthodox Church unites us, just as it unites this group of pilgrims hailing from different countries with the blessing of the Ecumenical Patriarch, the Patriarchate of Romania, and especially your own blessing”.

Metropolitan Arsenios pledged to convey the Patriarch’s words to the German-speaking members of his group.

Gifts were exchanged at the end of the meeting, followed by the distribution of eulogias by His Beatitude to the pilgrims.