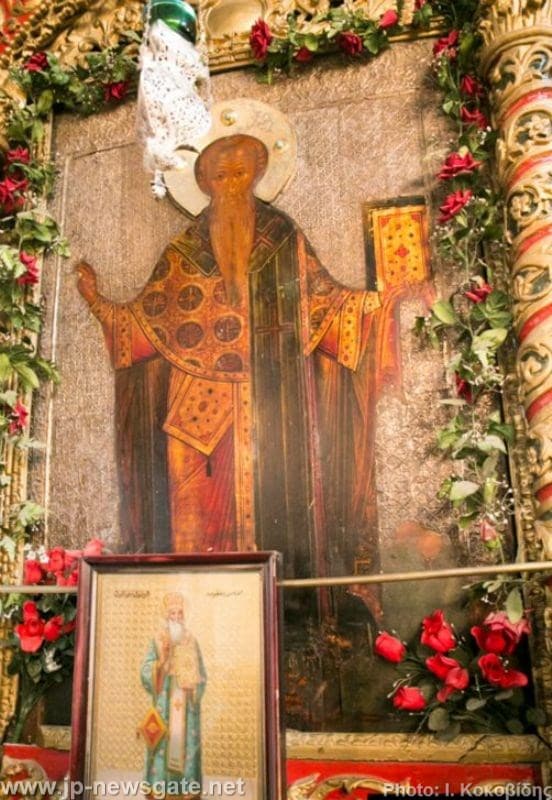 On Wednesday the 23rd of October/5th of November 2014, the Patriarchate celebrated the feast of the glorious St James the Brother of God, first Hierarch of the Church of Jerusalem, at the Cathedral dedicated to his name, which in fact serves as connecting pathway between the Hagiotaphite Brotherhood and the Church of the Resurrection.

St James the Brother of God is the Lord’s brother, being the son of Joseph, husband to Our Lady Theotokos. James was appointed by the Lord to be the first Bishop of the Church of Jerusalem, which he apostolically shepherded, writing a letter which is included in the New Testament, and leading, in 49 AD, the First Ecumenical Council. St James suffered a martyr’s death when Jews pushed him from the pinnacle of the Temple of Solomon, after he confessed that Jesus is the Son of God and Christ.

The Vespers and Divine Liturgy were led by Patriarch Theophilos of Jerusalem. Co-officiating with Him were the Elder Secretary-General, Archbishop Aristarchos of Constantina, and Archbishop Theodosios of Sebaste. Archimandrite Stephanos led the Hagiotaphite Hieromonks. Also in attendance were the vicars at St James Cathedral, Steward Issa Awad and Presbyter Farah-Charalambos Bantour; Archdeacon Evlogios and deacon Dionysios. The cantors sang in Greek, Russian, and Arabic.

The Greek Consul-General to Jerusalem, Mr Georgios Zacharoudiakis, attended the service with his esteemed wif, in the presence of Rum Orthodox parishioners, Greeks from the Greek parish, nuns and pilgrims from Greece and Russia. Patriarch Theophilos preached the Word of God in Greek.

After Communion and the conclusion of the service, the Patriarchal retinue proceeded to St Constantine’s terrace where they were joined by Prelates, and from there walked to the Patriarchate.

At the Patriarchate, a Deesis (Supplication) was made, and the Patriarchal Polychronism sang, before the officiants took off their sacerdotal vestments. At the Synodicon, His Beatitude addressed attendants in Greek.