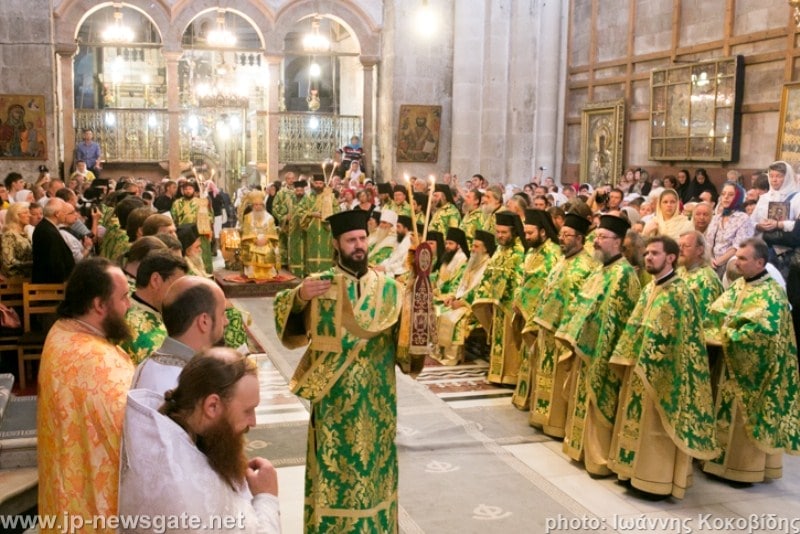 THE FEAST OF THE UNIVERSAL EXALTATION OF THE VENERABLE CROSS (2014)

On Saturday, the 14th/27th of September 2014, the Patriarchate observed the feast of the Universal Exaltation of the Venerable Cross.

The feast commemorates the crucifixion of our Lord Jesus Christ on Golgotha for our salvation, and the exaltation of the Lord’s cross after its discovery by Saint Helena and Archbishop Makarios of Jerusalem in 336 AD. In 629 AD, Emperor Heraclius elevated the cross on the Horrendous Golgotha after his victory against the Persians.

Vespers for this universal event began on the afternoon of Friday the 13th/26th of September 2014, with the recitation of the Ninth Hour at the monastic Church of Sts Constantine and Helena. Vespers was followed by a procession on foot to the Church of the Resurrection, and censing at the Holy Apokathelosis (Removal from the Cross) and the Holy Sepulchre. Their Holinesses the Members of the Synod venerated at the Holy Sepulchre, whereas deacons performed censing along the holy shrines. Great Vespers was then held at the Katholikon, led by Patriarch Theophilos of Jerusalem, as the Head Cantor, Archimandrite Aristovoulos, sang assisted by Greek chanters.

On the morning of this universal feast, the Patriarchal Hagiotaphite retinue began their procession to the All-holy Church of the Resurrection.

The service was led by H.B. Patriarch Theophilos of Jerusalem. Co-officiating were the Most Reverend Prelates: Metropolitan Isychios of Kapitolias; Metropolitan Timotheos of Bostra, Archbishop Theophanes of Gerassa; Archbishop Dorotheos of Avila; Archbishop Aristarchos of Constantina; Archbishop Methodios of Tabor; Archbishop Theodosios of Sebaste; Archbishop Demetrios of Lydda; and Metropolitans Panteleimon of Xanthe and Theologos of Serres, visiting from the Church of Greece; Metropolitan Chrysostomos of Kition (Cyprus); Metropolitan Nikolaev of Pitirim; Metropolitan Alexander of Pereyaslav; Bishop Clement of Irbib; and Bishop Stephanos of Gomeh. Also in attendance were Hagiotaphite Hieromonks and Priests from the Orthodox Churches of Greece, Russia, Romania and Ukraine. Archimandrite Aristovoulos chanted in Greek and Russian, aided by the head cantor of Kozani, Mr Soterios Arvanitis, in the presence of the Greek Consul-General to Jerusalem, Mr Georgios Zacharoudiakis and a crowd of pilgrims from Greece, Russia, Ukraine, Romania and Cyprus.

After the apolysis, a procession began towards the chapel of the discovery of the Venerable Cross. There, the Cross was raised to the four points of the horizon before being venerated on the site where it was discovered by Saint Helena.

The procession carried on thrice around the Holy Aedicula and across the Holy Apokathelosis before ascending to the Horrendous Golgotha.

There, where in 629 AD Emperor Heraclius elevated the Holy Cross, His Beatitude raised the Cross to the four points of the horizon and then placed it on the Altar above the hole where the cross had been planted.

The procession proceeded through internal stairs to the Holy Bema of the Katholikon, and from there it ascended to the Patriarchates, where His Beatitude addressed guests in Greek.

Fraternal embracing and kissing His Beatitude’s hand sealed the feast of the universal exaltation of the Venerable Cross.