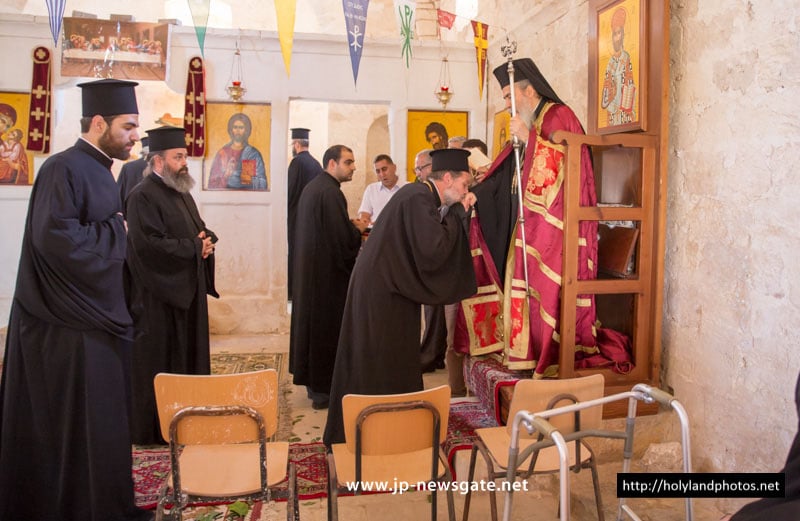 PROPHET ELIAS COMMEMORATED IN THE TOWN OF MAALOULE NEAR NAZARETH

On Saturday, the 13th/26th of July 2014, the memory of the Prophet Elias the Thesbite was commemorated in advance at the Church dedicated to him in the area of Maaloule, a suburb of Nazareth.

The Church of the Prophet Elias used to belong to the Arab-speaking Community of the Patriarchate which abandoned its seat upon the foundation of the state of Israel, in 1948. Since then, the area has been a military base. In recent years, the Patriarchate, mainly through the actions of Metropolitan Kyriakos of Nazareth and Archimandrite Hilarion, the Abbot at the Monastery of Tabor, went on to restore, renovate and reopen it.

His Beatitude Patriarch Theophilos of Jerusalem led the Matins and the Divine Liturgy. Co-officiating were the Most Reverend Kyriakos, Metropolitan of Nazareth, and the Elder Secretary-General, Archbishop Aristarchos of Constantina; Archimandrite Hilarion, Abbot at the Monastery of Mount Tabor; and Arab-speaking Presbyters from the Nazareth area. Orthodox faithful from Nazareth participated in piety, moved over the knowledge that their ancestors had lived in this very town.

During the Divine Liturgy, His Beatitude preached the Word of God in Greek.

At the conclusion of the Divine Liturgy, participants were offered refreshments in the forecourt of the Church, under the shade of pine trees.

At noon, the Most Reverend Kyriakos, Metropolitan of Nazareth, hosted the Patriarchal retinue and members of the congregation and of the Community to lunch.