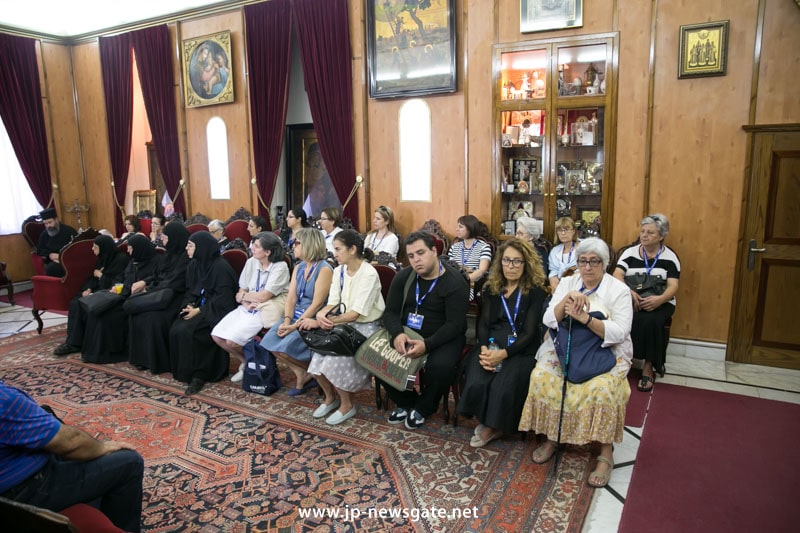 THE HOLY MONASTERY OF CHRYSOPEGE, HANIA, VISITS THE PATRIARCHATE

On Friday the 5th/18th of Julye 2014, a group of nuns and accompanying pilgrims from the Monastery of Chrysopege, of the Kydonia and Apokoronos Bishopric, and from the Monastery of St Irene of the Church of Crete, headed by Abbess Theoxeni and Archimandrite f. Justinus, Protosyncellus of the Bishopric of Florina, visited the Patriarchate.

This distinguished group of nuns and pilgrims was received by H.B. Patriarch Theophilos of Jerusalem, and Hagiotaphite Fathers.

His Beatitude welcomed the nuns and pilgrims to the Holy Land, specifically in Jerusalem, where the soil has been drenched with the redeeming blood of Christ, and where the earth received the crucified, pure Body of our Saviour, who was buried and rose from the dead. Owing to Christ’s sacrifice on the cross and His incarnate presence, this land bears sanctity and grace, sought and received by pilgrims. These pilgrims are sanctified as beholders of the holy lands “by the grace of the All-holy and Life-giving Tomb” and of the rest of the Shrines. By this grace, pilgrims become preachers of the hallowing property of the Holy Shrines and of the Church, which carries on its pastoral and consecrating work for the benefit of pilgrims. These very pilgrims stand among them as especially worthy of praise, for having defied the war situation in Gaza in order to conduct their pilgrimage.

Abbess Theoxeni of the Monastery of Chrysopege, thanked His Beatitude for these words and offered Him an epigonation [rhomboid ornament] embroidered at her Monastery, along with an icon of St Porphyrios, a late spiritual father at the Monastery.

Having received His Beatitude’s blessing, a cross, icons and other Jerusalemite eulogias, the nuns and pilgrims carried on their tour at the Holy Sepulchre.