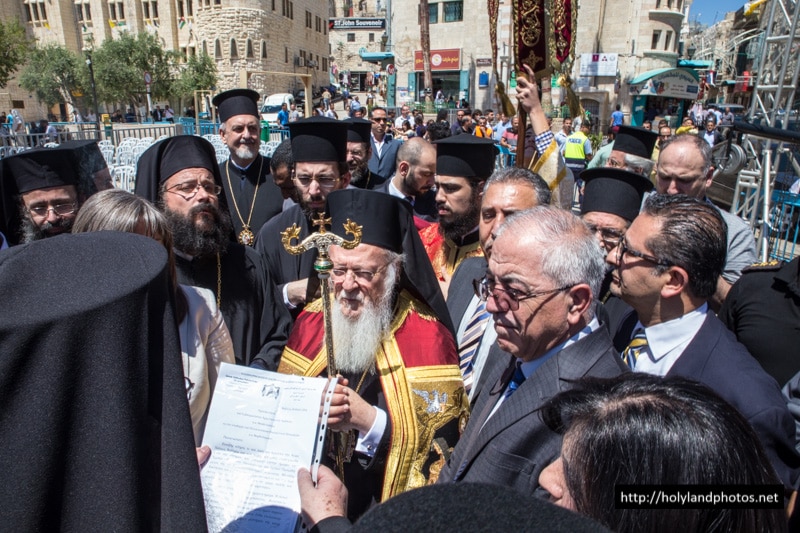 On the morning of Saturday the 11th/24th of May 2014, at approximately 11:00 am, His All-Holiness Ecumenical Patriarch Bartholomew, accompanied by His retinue, namely: His Eminence Archbishop Demetrios of America, and the Most Reverend Metropolitans: Gennadios of Italy and Meliti; Ioannis of Pergamos; Iacovos of Prince Islands; Emmanuel of France; and Gennadios of Sasima. Also, His Eminence Archbishop Job of Telmissos; the Chief Secretary, Archinandrite f. Bartholomew Samaras; the Very Reverend Archdeacon Maximos Vgenopoulos; the Very Reverend Patriarchal Deacon, Mr Andreas Sophianopoulos; the very Honourable Theodoros Angelopoulos, Archon Megas Logothetis (The Grand Deputy); the very Honourable Panteleimon Vingas, Archon Megas Hartophylax (The Grand Archivist) and the most erudite Nikolaos Tzoitos, Nikolaos Magginas, Nikolaos Papachristos, Symeon Fratzelas and Panteleimon Kioses and other clerics; and also by the Patriarchate of Jerusalem’s accompanying committee, namely: the Secretary of the Holy and Sacred Synod, Archbishop Demetrios of Lydda and the Patriarchal Commissioner in Constantinople, His Eminence Archbishop Nektarios of Anthedon, visited the city of Bethlehem.

Arriving at the courtyard of the Basilica of the Nativity, His All-Holiness was warmly received by the Patriarchal Commissioner in Bethlehem, His Eminence Archbishop Theophylaktos of Jordan.

He was equally received by representatives of the President of the Palestinian Autonomy, Mr Mahmud Abbas, Minister Ziyad Bandak, the Chairman of the Palestinian Committee on Christian Affairs, Mr Hanna Amire, the Prefect of Bethlehem, Mayor Vera Baboun, the Community Council of the Greek Orthodox Community of Bethlehem, clerics and a great crowd of faithful, exclaiming “Blessed is he who comes”.

From the courtyard, they entered the Basilica with priests dressed in sacerdotal vestments and cantors singing “Your birth, Christ our God” under the direction of the head cantor of the Church of the Resurrection, Archimandrite Aristovoulos.

His All-Holiness entered through the Basilica – a right reserved exclusively to the Orthodox –and through the chapel of St Nikolas and the South Gate to the Cavern, proceeded to the Holy Cave and venerated the Star and the Manger, whereupon the pericope of the Nativity was recited.

From the Cave, His All-Holiness rose to the Throne in the area in front of the iconostasis and led the Doxology service, before addressing the congregation.

From the Basilica, His All-Holiness proceeded to the renovated Hegoumen’s Quarters, where the Patriarchal Commissioner, His Eminence Archbishop Theophylaktos of Jordan, hosted Him and His retinue to a reception.

After leaving the Basilica of the Nativity, His All-Holiness crossed the checkpoint at Rachel’s Tomb, and proceeded to the David Citadel Hotel.