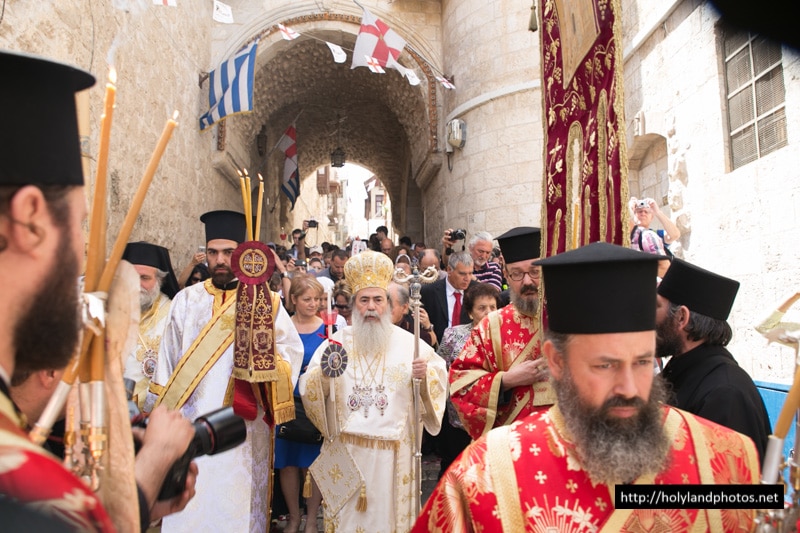 THE CEREMONY OF THE SECOND RESURRECTION AT THE PATRIARCHATE

On Easter Sunday, the 7th/20th of April 2014, at 1:00 pm, the Hagiotaphite Fathers gathered in the Hall of the Throne.
There, after the Paschal Embrace and while Archimandrite Aristovoulos, Head Cantor of the Church of the Resurrection, chanted the Byzantine “Christ Has Risen”, His Beatitude, the Prelates and Priests put on their white Paschal garments and read out the Ninth Hour of Easter: “Christ Has Risen”, “Having Viewed the Resurrection of Christ…”

After the Ninth Hour, amidst bells ringing and as Prelates carried Evangelistaria, the official, magnificent procession began of the icon of the Resurrection to the Holy Sepulchre through Christian Street.

Before the Holy Court, a supplication was made, followed by entry into the Katholikon, where the Easter Vespers was held.

After the Great Entrance, the Gospel of John was read out, on the first appearance of the Lord to His disciples, and Thomas’ doubting, expressed through these words:

“Unless I see the nail marks in his hands and put my finger where the nails were, and put my hand into his side, I will not believe” in Greek, Arabic, Russian, Hebrew, Romanian, English and German.

At the conclusion of Vespers, the Hagiotaphite Fathers proceeded to the Patriarchate, praising the Lord for having offered them this feast.