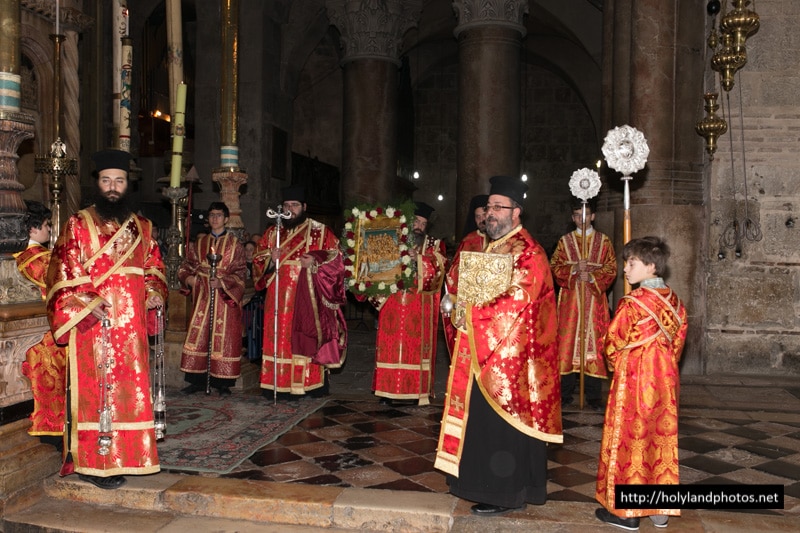 NAME DAY OF HIS BEATITUDE THEOPHILOS III, PATRIARCH OF JERUSALEM

On Sunday the 3rd/16th of March 2014, Second Sunday of the Fasting Period, the Name Day of His Beatitude Theophilos, our Father and Patriarch of Jerusalem was celebrated by postponement. The 9th of March commemorates St Theophilos, one of the Holy Forty who suffered a martyr’s death in the year 320 AD during the reign of King Licinius, at the Lake of Sebaste in Pontus.

The feast began at 2:00 pm with the reading of the Ninth Hour at the Monastic Church of Sts Constantine and Helen, followed by the progression of the Hagiotaphites to the All Holy Church of the Resurrection.

Following the welcoming, censing and veneration at the Holy Apokathelosis, and veneration at the Holy Sepulchre, the head of the feast, His Beatitude Theophilos, proceeded into the katholikon and rose to the Throne, in order to read the Preamble Hymn. The Head Cantor of the Church of the Resurrection, Archimandrite f. Aristovoulos, chanted while Prelates and members of the Holy and Sacred Synod went on to venerate at the Holy Golgotha, with deacons performing the censing along the sites of pilgrimage.

The service of Vespers followed, in the presence of pious nuns and pilgrims.

On the morning of the feast, at 7:00 am, the Patriarchal Retinue proceeded from the Central Monastery to the All Holy Church of the Resurrection.

Upon His entrance to the Church, the Patriarch venerated at the Holy Apokathelosis and the Holy Sepulchre before entering the Katholikon.

Subsequently, His Beatitude, the Prelates and Priests put on their Prelatic and Hieratic garments in the Holy Bema.

After each took their place in the nave, the Divine Liturgy began, led by His Beatitude from the Navel of the Earth.

The festive Divine Liturgy of St Basil was officiated by His Beatitude Theophilos, with co-officiating Hagiotaphite Prelates: the Most Reverend Metropolitans of Nazareth and Kapitolias, Kyriakos and Isychios; their Eminences, Archbishop Theophanes of Gerasa, Damaskinos of Joppe, Dorotheos of Avila, Aristarchos of Constantina, Theophylaktos of Jordan, Theodosios of Sebaste, Demetrius of Lydda, Makarios of Qatar and Philoumenos of Pella. Alco co-officiating were four Bishops visiting from the Patriarchate of Moscow, namely: the Right Reverend Clement of Krasnoslobotsk; Diodorus of Melekes; Methodios of Almetievsk; and Nicephorus of Otrantni; and the Most Reverend Metropolitan Vincent of Ploiesti, visiting from the Patriarchate of Romania after the restoration of ecclesiastical communion. Also present were numerous Hieromonks visiting from the Orthodox Churches of Greece, Russia and Romania. The Head Cantor of the Church of the Resurrection chanted, whereas a great crowd of Orthodox faithful from Greece, Russia and Romania participated in piety.

At the end of the Divine Liturgy, the Lord’s people proceeded to receive Communion.

At the conclusion of the service, Doxology began in celebration of the Patriarch’s feast day, in the presence of the Greek Consul General to Jerusalem, Mr Georgios Zacharoudiakis.

At the Patriarchate, the Elder Secretary-General addressed His Beatitude, followed by Mr Zacharoudiakis.

Other addresses were made by the Prelates as well as by f. Farah Danbour on behalf of the Arab-speaking flock of St James Cathedral in Jerusalem; Professor Panayiotis Antoniades on behalf of the Patriarchal School of St Sion, and Mr Nicolaos Sarris on behalf of St Demetrius School.

In His reply speech, His Beatitude extended thanks to all present.

The spiritual joy of the feast was supplemented by tangible joy in the form of festive meatless lunch.