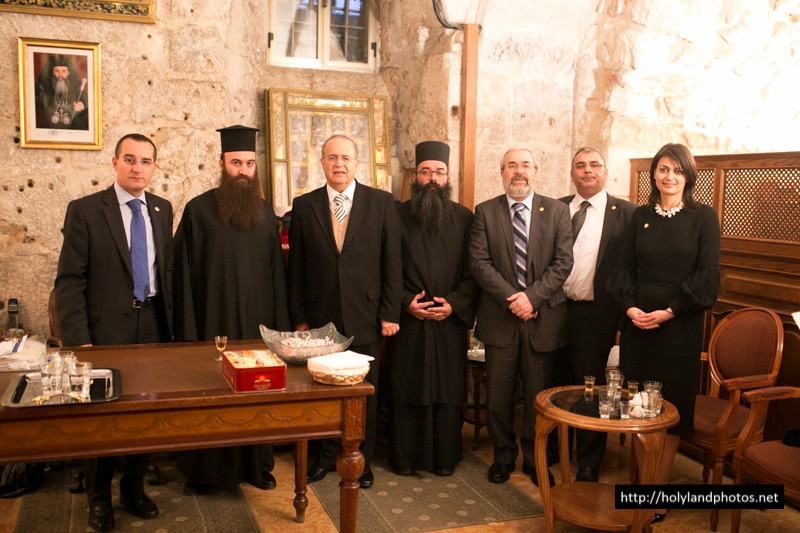 On the evening of Wednesday the 8th/19th of February 2014, the Cypriot Minister of Foreign Affairs, Mr Ioannis Kasoulides, while in Israel for a political visit, visited the Church of the Resurrection and the Patriarchate. Mr Kasoulides was accompanied by his personal associates and by the diplomatic delegates of the Republic of Cyprus to Israel and the Palestinian Autonomy.

The Minister and his associates were received by His Beatitude Theophilos, our Father and Patriarch of Jerusalem, in the presence of Hagiotaphite Fathers.

An interesting discussion took place in the context of the visit, on the situation of the Christians in the Holy Land, especially Syria and the Middle East; also, on the need for a peaceful coexistence between them and the adherents of other religions, Jews and Muslims, and for the peace-keeping contribution of the Patriarchate by means of maintaining private schools open to both Christians and Muslims. The meeting revolved around the spiritual and physical heritage of the Patriarchate in the Old City of Jerusalem, and the need to preserve its status as a context safeguarding the rights of Christians and the adherents of other religions.

Also raised was the problem caused by anarchic Palestinians trespassing on Patriarchate property in the Holy Monastery of Bethany, as well as its recent resolution on behalf of the Palestinian Autonomy, following actions taken by the Patriarchate, and the Greek and Cypriot Governments.

At the end of the meeting, presents were courteously exchanged between His Beatitude and the Minister, upon which Mr Kasoulides left for the remaining part of his mission.