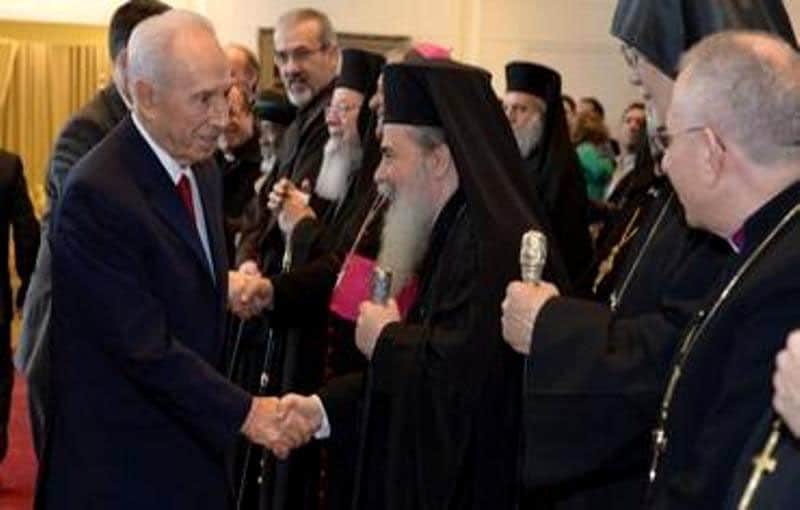 On Monday, the 18th/30th of  December 2013, the regular reception of the Heads of Christian Churches in the Holy Land by the President of the state of Israel, Mr Shimon Peres, took place in the Presidential Palace in Jerusalem, on the occasion of the advent of the new year.

The event initially began as a reception, followed by an official ceremony, at the Events Hall of the Presidential Palace.

At the beginning of the ceremony, President Peres welcomed the Heads of Churches and their attendants, pointing out that the meeting is an opportunity to pray for the cessation of bloodshed in many countries of the world. “Humanity”, he said, “suffers from the lack of safety and the necessities of life, because of terrorist acts committed across the world. Many countries such as Syria, Yemen, and others, are bleeding. Organized terrorist groups come from the outside and act against other countries in a terrorizing and destructive manner. The adherents of the three largest religious have the power to pray for peace. Our thoughts are directed to explosions in different countries of the world, as well as to families and their victimized children.

The state of Israel is committed to the freedom of worship and the freedom of religion. Let us allow the Holy Spirit to come to the Holy Pilgrimage Sites and to the City of Jerusalem for peace. The state of Israel brought to justice cases of violent acts at the expense of Christians. We are in need of the prayers of religious leaders. I wish all of you “Merry Christmas”.

For his part, the Interior Minister of Israel, Mr Gideon Sa’ar, underlined the existence of Christian Communities in the cities of Israel, celebrating the feast of Christmas in a festive atmosphere, adding that the state of Israel is committed to providing freedom of worship to Christian Churches and unhindered access to the Holy Sites of Pilgrimage; also, that it condemns the attacks of extreme elements against the Christians, known as ‘price-tag crimes’. These incidents are opposed to the values of the state of Israel. “On this occasion”, he said, “I welcome the Heads of Christians Churches to Israel and their representatives, Patriarch Theophilos of Jerusalem and all of them. I take this opportunity to extend my congratulations on the visit of Pope Francis to the Holy Land next May and wish everyone a Happy New Year”.

His Beatitude Theophilos, our Father and Patriarch of Jerusalem, spoke in English on behalf of the Heads of Churches, see link: https://en.jerusalem-patriarchate.info/2013/12/30/3719

The speech marked the conclusion of the visit of the Heads of Churches to the Presidential Palace.