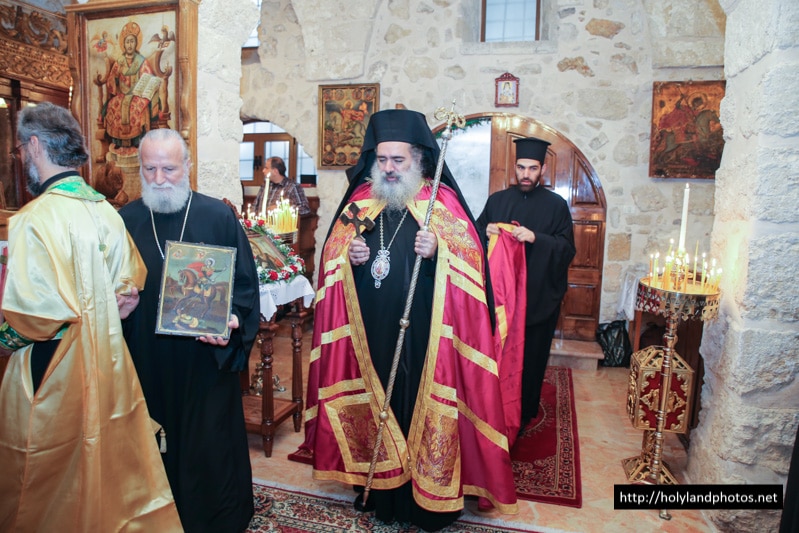 THE FEAST OF ST DEMETRIUS THE GREAT MARTYR AT THE PATRIARCHATE

On Friday the 26th of October/8th of November 2013, the feast of St Demetrius the Great Martyr and Myrrh-Streamer was celebrated at the ancient chapel dedicated to him. The chapel lies between the Central Monastery of the Hagiotaphites and the School of St Demetrius, named thus after the chapel.

It is well known to all Christians that St Demetrius hailed from Thessaloniki and blessed Nestor to confront Lyaios, a pompous idolater, before slaying him. As a result of this, both Nestor and St Demetrius suffered a martyr’s death in the name of Christ.

The saint’s name-day was celebrated with Vespers in the evening and the Divine Liturgy led by His Eminence Theodosios, Archbishop of Sevasteia. Co-officiating were Hagiotaphite Hieromonks and deacons in the presence of piously praying pilgrims, nuns, and pupils at the Patriarchal School of St Demetrius.

After the koinonikon of the Divine Liturgy, His Eminence Theodosios, Archbishop of Sevasteia, wished to all present that they be blessed by St Demetrius, invoking the life of the saint as an exemplum of profound faith in Christ, in defiance of death itself.

The liturgy was followed by refreshments in the forecourt of the chapel, and a festive reception at the School of St Demetrius.

The day included a celebration at the School of St Demetrius, during which the Synaxarium of the saint was read out in Arabic and Greek, whereas Principal Mr Samir Zananiri addressed the attendants, and students of all ages and classes performed children’s dances and recited poems.

The event closed with wishes and advice from His Beatitude.