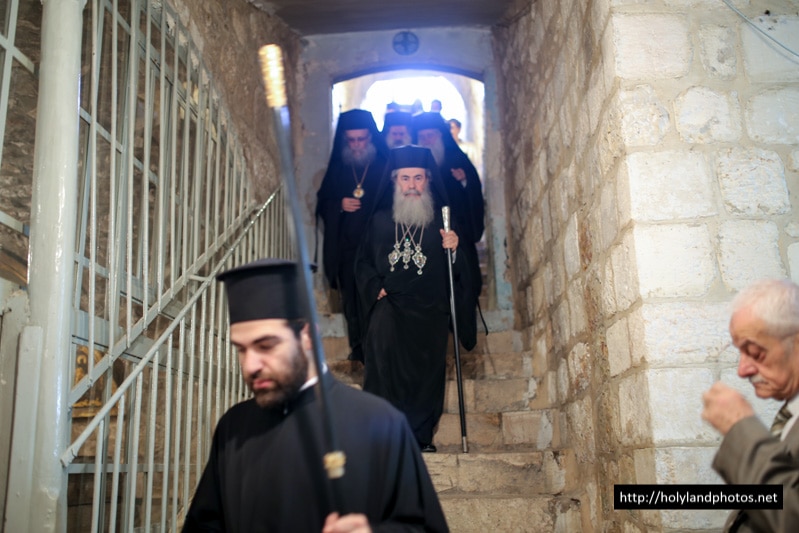 FEAST OF ST JAMES, BROTHER OF THE LORD, AT THE PATRIARCHATE

On Tuesday, 23rd of October/5th of November 2013, the memory of the glorious apostle and hieromartyr James, the Brother of the Lord, was celebrated by the Patriarchate of Jerusalem in the ancient church dedicated to him. The church stands between the Central Monastery of the Hagiotaphites and the All-holy Church of the Resurrection, beneath its belfry. It constitutes the Cathedral of the Rum Orthodox Arab-speaking Community of Jerusalem.

In the afternoon, at 2:30 pm, Vespers was held, led by His Beatitude Theophilos, our Father and Patriarch of Jerusalem. The procession of Vespers was attended by Hagiotaphite Fathers, nuns, Arab-speaking locals, parishioners and pious Greek-speaking and Russian-speaking pilgrims. After the procession, amidst the sound of bells ringing, the Patriarchal Retinue progressed to the Patriarchates.

On the day of the feast, at 8:00 am, His Beatitude Theophilos arrived at the Church of St James, began chanting the Katabasias, and led the Matins and Divine Liturgy. Co-officiating were Hagiotaphite Prelates: their Eminences the Archbishops of Avila, Tabor and Sevasteia, Dorotheos, Methodios and Theodosios respectively; Hagiotaphite Hieromonks and the presbyters of the Church of St James, Steward f. Issa Touma and priest Farah-Charalambous Bantour, and hierodeacons. The Greek Consul-General in Jerusalem, Mr Georgios Zacharoudiakis attended the service in the company of his associates and a crowd of Orthodox faithful, Jerusalemite parishioners and pious pilgrims.

To this Christian crowd, His Beatitude preached the Word of God in Greek. This is an excerpt of His speech in English:

Today the Church of Christ and indeed the Church of Jerusalem delights and rejoices because St James was proclaimed an Apostle and the first Bishop in Jerusalem by the Lord himself and was the first to write and set forth the Divine Liturgy, taught by none other than Christ.

In other words, my dear brothers, St James became an eye and ear witness to the mystery of divine economy in Christ and of Christ’s teachings, as demonstrated by his catholic epistle, where he names himself James of God, the servant of the Lord Jesus Christ. And truly, he is recognized as a servant of Christ. This, because he faithfully emulated Christ in words and deeds, as attested in the preaching on faith included in his epistle, namely: “What good is it, my brothers and sisters, if someone claims to have faith but has no deeds? Can such faith save them? Suppose a brother or a sister is without clothes and daily food.If one of you says to them, “Go in peace; keep warm and well fed,” but does nothing about their physical needs, what good is it? In the same way, faith by itself, if it is not accompanied by action, is dead. As the body without the spirit is dead, so faith without deeds is dead”. (James 2, 14-17 & 26)

During the reception at the Patriarchate, His Beatitude addressed in Greek the Hagiotaphite Fathers, the Consul-General and laymen. An excerpt from the address is cited here in English:

“It is precisely the wisdom of God, namely the Holy Spirit, which makes us not strangers to God but his fellow citizens, built on the foundation of the apostles and prophets, with Christ Jesus himself as the chief cornerstone”. (Ephesians 2, 19-20).

The safe-keeping of the construction of the Church, assembled in Christ, is guaranteed by the apostolic succession through which the Church is prolonged in Christ and through Christ along the centuries. As proprietors of this treasure in the face of the holy, glorious and most honourable Apostle James, we have properly and assuredly performed the divine liturgy in the church consecrated to St James, where we made a supplication for a righteous and peaceful condition of the entire world, especially our region, for the spiritual well-being and progress of our holy Hagiotaphite Brotherhood and of our pious Christian race.

The address was followed by brotherly embrace and kissing the hand of His Beatitude.