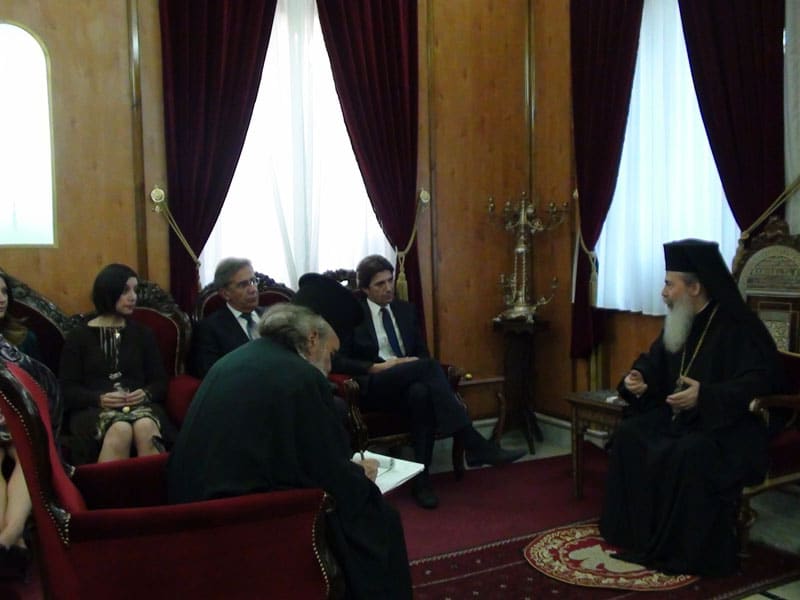 DELEGATION OF GREEK MINISTRY OF THE ENVIRONMENT VISITS PATRIARCHATE

On the afternoon of Tuesday the 9th/22nd of October 2013, Mr Constantinos Triantis, Special Secretary for Water Resources at the Greek Ministry of the Environment, accompanied by a small group of his associates at the Ministry, Mrs Vasiliki-Maria Tzatzaki, Mr Nikolaos Mamaloungas and others, visited the Patriarchate in the context of their cooperation with executives at the Israeli Ministry of Water Resources.

The delegation was received by His Beatitude Theophilos, Our Father and Patriarch of Jerusalem, in the presence of Hagiotaphite Fathers, and were informed on the Patriarchate’s work as well as current adversities, due to the lack of adequate water in the narrower area of the Middle East, where Patriarchal Monasteries require a greater supply of water.

On this occasion, His Beatitude also referred to the now resolved matter of the Church of the Resurrection irrigation.

The delegation, having received gifts from His Beatitude, left in order to venerate the Holy Sepulchre.