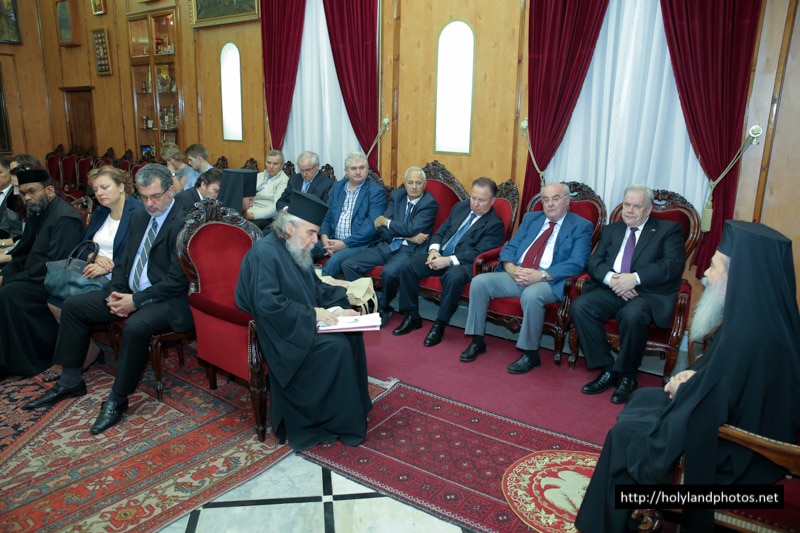 On the afternoon of Saturday the 6th/19th of October 2013, the Secretariat of the Inter-parliamentary Assembly on Orthodoxy visited the Patriarchate.

The delegation, consisting of approximately thirty-five members, was received by His Beatitude Theophilos in the presence of Fathers of the Holy Sepulchre.

During the visit, Secretary General Mr Anastasios Nerantzis pointed out that the Inter-parliamentary Assembly on Orthodoxy consists of distinguished members from twenty-five Orthodox countries, with Greece and Russia being the Assembly’s pillars and guarantors.

In his address to His Beatitude, the President of the General Assembly, Mr Sergei Popov said:

“We are especially pleased to visit the Patriarchate of Jerusalem, the most ancient religious institution in the Holy Land. Its peacemaking, conciliatory and political role, since 451 AD onwards, we deeply appreciate, alongside the personal work of Your Beatitude”.

“We are also pleased over the fact that our paths cross, namely the path of the Patriarchate and the path of our organization, as we too aim and pursue the promotion of peace, change which is personal and social alike, and reconciliation. It is with emotion that we visit the Holy Sepulchre and the Patriarchate, in solidarity to its work in the flaring region of the Middle East and beyond”.

In His reply speech, His Beatitude expressed his joy over the fact that the Orthodox Church is today assigned with an important role in the life of humanity. Its foremost task is man’s healing, change, conciliation; it does not promote political interests or the objectives of globalization. This is the work of the Orthodox Church in its entirety, especially so of the Church of Jerusalem from where the Christian truth emerged as a message of peace, change and justice.

For its work the Patriarchate enjoys the respect and appreciation not only of the other Churches but also of political governments and religions in the area, Judaism and Islam. That is why the Patriarchate expects support and solidarity, not undermining. It maintains the sanctity of the All-Holy Sites of Pilgrimage which are not to be visited only as museums but also as functional spaces.

“The sites of pilgrimage are worthy of respect for Christians, Muslims and Jews”, His Beatitude pointed out.

“Political and religious groups claim exclusivity to Jerusalem. Jerusalem, as we all know, is internationally a corpus separatum. For us, Jerusalem is the spiritual capital of the whole world” said His Beatitude and went on to add:

“[…] For this reason the Patriarchate plays a role in the settlement of the political status of Jerusalem. That is why we have been trying to convince our Orthodox brothers to support the Patriarchate and not use it to achieve political goals. I mean that the Patriarchate has offered blood and money for Christians. We happily receive both Orthodox and non-Orthodox pilgrims because their presence attests to the fact that the sites of pilgrimage belong to the whole world. There is in Jerusalem the paradox of multicultural tension and at the same time peaceful coexistence. The Patriarchate is the only autocephalous and indigenous Church, hence in it meet the most extreme with the most moderate elements”.

At the end of his speech His Beatitude offered the President of the Inter-parliamentary Assembly on Orthodoxy, Mr Sergei Popov, and Secretary General, Mr Anastasios Nerantzis, the “History of the Church of Jerusalem”, a depiction of the Nativity and icons of the Holy Sepulchre; He also offered Jerusalemite eulogias to all members of the Assembly.

Subsequently, the Inter-parliamentary Assembly on Orthodoxy left for two-day assignments in the city of Bethlehem where they visited the Basilica of the Nativity.