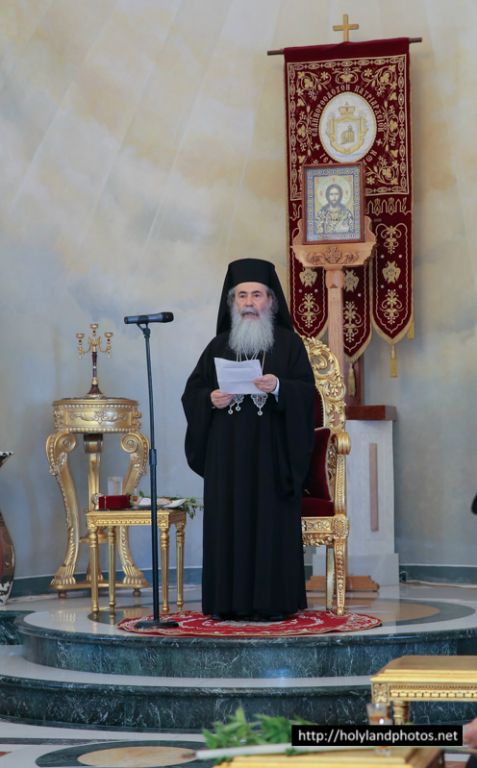 THE PATRIARCH OF JERUSALEM DECORATES THE METROPOLITAN OF XANTHE

In the hall of the Patriarchate, at the conclusion of the divine Liturgy and the rite of the Elevation of the Cross in the Church of the Resurrection on Friday, 14th/27th September 2013, His Beatitude Theophilos, our Father and Patriarch of Jerusalem, decorated the Most Reverend Panteleimon, Metropolitan of Xanthe – visiting the Holy Land on pilgrimage – with the medal of the Commander of the Order of the Knights of the Holy Sepulchre.

This honorary distinction was conferred upon the Metropolitan of Xanthe, as said by His Beatitude, for his vivid interest in the All-holy Pilgrimage Sites and the Patriarchate of Jerusalem, materialized by means of several visits intended for veneration, in the company of members of his God-saved Metropolis.

Touched, Panteleimon, the Metropolitan of Xanthe, thanked His Beatitude for the honour bestowed upon him and promised to always carry the cross for the protection of himself and his Metropolis alike. He also extended thanks over the fact that the Holy Cross was sent forth to His Metropolis, accompanied by the Metropolitan of Kapitolias, Isychios, in order to guard it from occurrences of violence which, abetted by wickedness, had recently descended upon it.