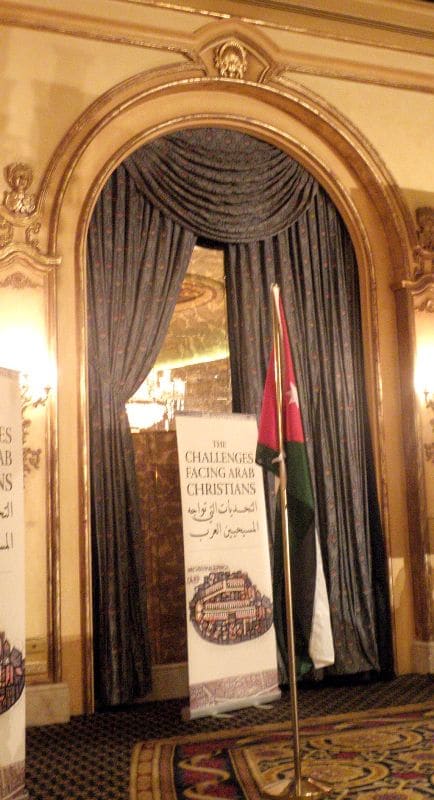 Between the 21st to the 22nd of August/3rd to 4th of September 2013, an international conference entitled “The Challenges facing Arab Christians” took place in Amman, Jordan, at the Hotel Royal, upon the initiative of His Majesty, King Abdullah of Jordan, through His Royal Highness, Prince Ghazi.

Discussed at the conference were problems facing Arab Christians in the Middle East areas of Egypt, Iraq, Libya, Jordan and Jerusalem.

Speakers at the Conference were first and foremost the Heads of Churches in the Middle East, and the Leaders of other Christian Churches. A list of the speakers may be read here: https://en.jerusalem-patriarchate.info/2013/09/03/2989

His Royal Highness, Prince Ghazi, opened the Conference on Tuesday, the 21st of August/3rd of September, pointing out that Christians have become targets in various countries and that we ought to bear in mind that Arab Christians and Muslims have lived together as one nation from the time of the Covenant of Umar and together they have fought in the struggles of their homeland. Also, that the democratic legislation of Jordan provides both Arab and Christian citizens with equal rights and that when the Muslims came to Jerusalem, the Christians were already there.

Rev. Olav Fykse Tveit, General Secretary of the World Council of Churches, also spoke at the conference, saying how the Middle East is to the Council a unique region to which God was revealed through the prophets, Jesus Christ and the Apostles, therefore there is an urgent need to maintain peace in settling the conflict between the Palestinians and Israel.

After the end of the first session of the conference, participants were received at the Palace by His Majesty, the King of Jordan, Abdullah II. Welcoming his guests, the King noted that at a time when our region suffers from acts of violence, Jordan invites Christians and Muslims from across the world for the sake of peace, religious freedom, justice and prosperity; also for maintaining the identity of Christians and the character of Jerusalem, the Christian and Muslim deference of which Jordan has undertaken the obligation to protect.

During the meeting, the King decorated distinguished personalities participating in the Conference. The King Hussein of Jordan medal (2nd order) was awarded to the Most Reverend Benedict, Patriarchal Commissioner in Amman.

On the evening of the same day, the participants visited the Lord’s Baptismal Site on the East Bank of the Jordan river, as well as the Monastery of John the Baptist, founded by the Most Reverend Benedict, who hosted a dinner for them.

During the dinner, His Beatitude Theophilos, Our Father and Patriarch of Jerusalem, addressed his fellow diners in English. His speech may be read here: https://en.jerusalem-patriarchate.info/2013/09/03/2956

On Wednesday the 22nd of August/4th of September 2013, during the “Jordan and Jerusalem” Session, the Patriarch of Jerusalem read the following speech in English:  https://en.jerusalem-patriarchate.info/2013/09/04/2948

As regards the challenges facing Arab Christians, all speakers at the Conference pointed out these general points:

That Jordan remains a paragon of a democratic state, securing and guaranteeing the peaceful coexistence of Christians and Muslims, and equal rights for both. That the Conference sends the message of religious freedom and mutual respect for the followers of all religions. That it recognizes and proposes the force of culture and not the culture of force. That Christians and Muslims denounce the use of violence among themselves or in the face of others.

That the Conference makes an appeal for the liberation of the Prelates abducted in Syria. That peace in the Middle East depends on the peaceful settlement of the Jerusalem problem. That schools need to cultivate reconciliation and acceptance between Christians and Muslims. That Arab States ought to encourage their Arab Christian citizens to not abandon their houses and become refugees.

That God cannot be found in power but in justice and truth. That the Church proposes to serve its members and the people. That respect for otherness is a requirement for peace. That the Muslims who came to Jerusalem in 638 AD encountered Christians, they therefore treat them with appropriate respect. That to apologize requires power of the soul, whereas the inability to apologize reveals a weak soul. That Arab Christians ask to live as equal citizens in Arab nations and not as minorities. That the Conference promotes as values the peaceful coexistence of Christians and Muslims, religious tolerance, dignity, reconciliation and equality.

At the conclusion of the Conference, dinner was hosted by the Rum-Orthodox Group, under the presidency of Mr Raouf Abu Jamber, for all participating prelates and laymen.

The long-standing tradition of exchanging Christmas greeting by Heads of Churches in...