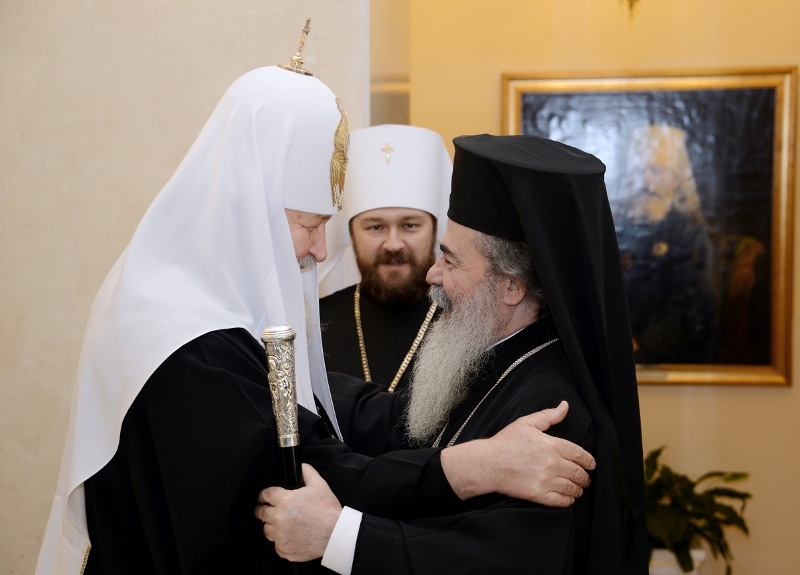 On Tuesday the 10th/23rd of July 2013, His Beatitude Theophilos, Our Father and Patriarch of Jerusalem, with His retinue of members of the Holy Sepulchre and the Very Reverend f. Stephanos, Patriarchal Commissioner in Moscow, visited His Beatitude the Patriarch of Moscow and all-Russian at his Patriarchal and Synodic residence, namely “Danilovskaya”.

There, the Patriarch of Jerusalem was given a reception worthy of his position, followed by an exchange of brotherly wishes and a discussion of bilateral issues of concern to the two Churches, focusing on All-holy sites of pilgrimage and the situation of Christians in the Middle East.

Then, His Beatitude the Patriarch of Jerusalem and His retinue visited the Holy Pilgrimage site of Hosia Matrona of Moscow ((† 1952) in Moscow.

At noon His Beatitude visited the Dependency of the Holy Sepulchre in Moscow, where the Hegoumen and Patriarchal Commissioner, Archimandrite f. Stephanos gave a warm reception and held an opulent lunch with the participation of the Greek Ambassador to Moscow, Ms Magdalene Koumanoudi, and the Consul-General.

THE FORMER PATRIARCH OF JERUSALEM EIRINAIOS HAS SLEPT IN THE LORD

The Hagiotaphite Brotherhood announces, after sorrow, not the Lord’s sorrow, the...