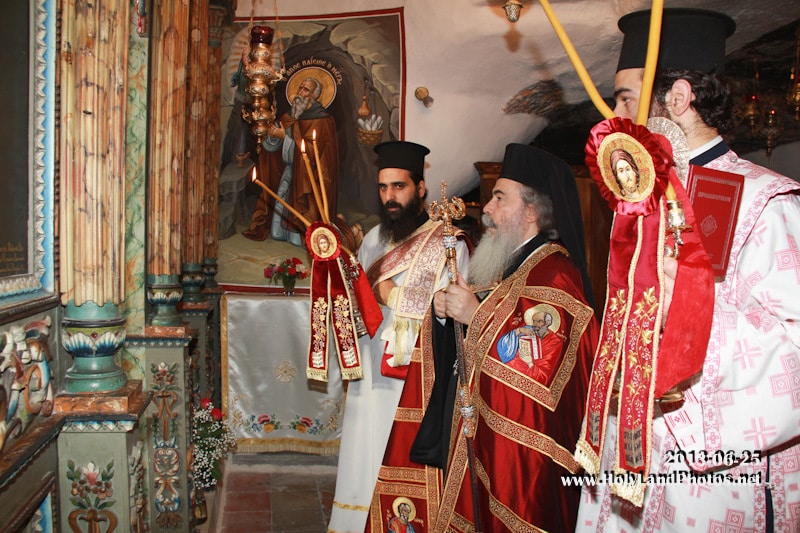 THE FEAST OF ST ONOUPHRIOS AT THE PATRIARCHATE

On Tuesday the 12th/25th of June 2013, the feast of St Onouphrios was celebrated at the Holy Monastery bearing his name, which lies at the Gihon valley opposite the Pool of Siloam. This Monastery, dedicated to St Onouphrios of Egypt, is one of the ancient Monasteries of the Patriarchate. It lies on rocks and carved tombs of the cemetery which was “purchased for the burial of foreigners” by the chief priests of the Jews for the three hundred silver pieces the repentant Judas Iscariot, who had delivered the Lord, had returned to them (Matthew 27, 6-8).

At the church of this Holy Monastery, founded long ago by Archimandrite Metrophanes, Guardian of the Holy Sepulchre, in 1893, His Beatitude Theophilos, Our Father and Patriarch of Jerusalem led the Divine Liturgy. Co-officiating were the Most Reverend Isychios, Metropolitan of Kapitolias and Patriarchal Commissioner; Archbishop Aristarchos of Constantina, Elder Sacristan; Priest-Monk fr. Christodoulos from the Metropolis of Patras, Priest-Monk fr. Ieronymos from the Archbishopric of Cyprus; the very Reverend Archimandrite Ieronymos, hegoumen in Fhes and Vice-President of Financial Affaris; Archdeacon fr. Athanasios and Priest-Deacon fr. Eulogios.

Monks and nuns participated in this divine Liturgy in devoutness and reverence, together with laymen and laywomen, pilgrims, and residents of Jerusalem and the Hill of St Sion.

To this pious congregation, His Beatitude Theophilos preached the Word of God, an excerpt of which is cited here:

[…] Hosios Onouphrios, Our Father, set deification as his only purpose in life, bearing in mind the words of the Great Athanasius, that God was humanized, became a human after us, so that us humans would become deified.

This is precisely the purpose of the descent, on behalf of our Lord Jesus Christ, of the Paraclete, namely the Holy Spirit, upon the world through His holy Church, to make us into vessels of the perceptible and heavenly light, that is the Holy Spirit, as was the case with our Hosios Onouphrios according to his hagiographer: “A light that is perceptible and heavenly you have received in your heart, of the undefiled Trinity you have become a vessel, Onouphrios. And now among the angels you are counted, crying Alleluia”.

[…] Our Church, my dears, promotes we would say in a special manner the great figures of the martyrs and ascetics of Christ’s love. And this, so that it may be known and revealed to men that the man who does not accept the light of Christ, namely the Holy Spirit, shall remain in darkness”.

After the Divine Liturgy, a procession followed to the graves of the Monastery’s proprietors and other men entombed there, where a supplication was made for the repose of the souls of the Fathers there entombed and of the recently departed Nun Serapheima.

After the procession and the apolysis of the Divine Liturgy, there followed a brief reception at the quarters of the Mother Superior, the Very Reverend Paisia.