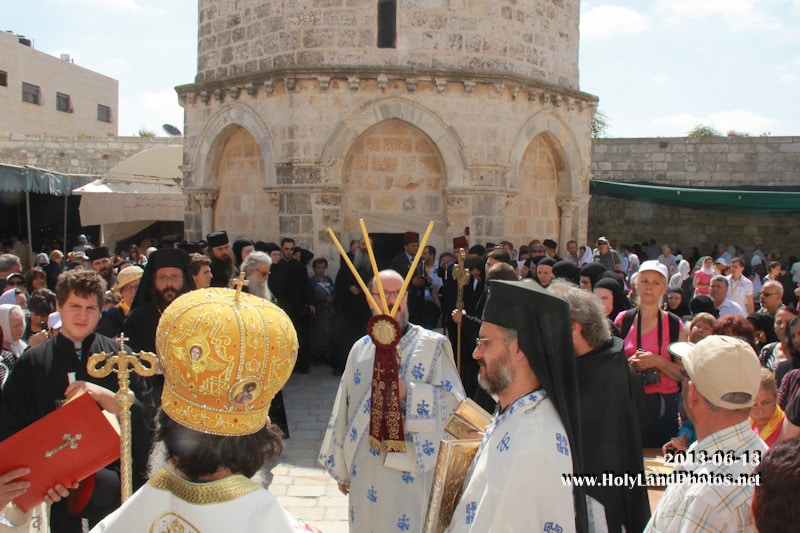 THE ASCENSION OF THE LORD CELEBRATED AT PATRIARCHATE

On Thursday, 31st May/13th June 2013 the feast of Our Lord and Saviour, Jesus Christ, was celebrated at the Patriarchate.

On the evening of the feast, the Vespers service was officiated at the monastic church of Sts Constantine and Helen. In the same morning, the Matins service and divine liturgy were held, led by His Beatitude Theophilos, Our Father and Patriarchate of Jerusalem.

In the evening, at the holy site where the Ascension took place, a holy water rite was performed, as the Altar of the site remains to this day out-of-doors and exposed within the area of the mosque. The service was followed by the 9th Easter Hour and the Vespers, in Greek and Arabian alike, due to the participation of the Arab-speaking community, led by the Reverend Demetrius, Archbishop of Lydda.

[…] On the morning of the feast, the divine liturgy was officiated at the pilgrimage site, again led by the Reverend Demetrius, Archbishop of Lydda, in the presence of numerous pilgrims, both residents of Jerusalem and visitors from afar. During the Divine Liturgy, HB Theophilos, Our Father and Patriarch of Jerusalem arrived at the site with members of the Holy and Sacred Synod, as well as pilgrims, before visiting the Muslim imam at his residence which is adjacent to the Pilgrimage Site.

Subsequently, His Beatitude and retinue visited the holy monastery of the Ascension, headed by father Achillios, and from there, the Holy Monastery of the Men of Galilee in Little Galilee, headed by Archimandrite Anthimos.

They were followed by the Reverend Demetrius, Archbishop of Lydda, after the conclusion of the divine liturgy at the Pilgrimage Site.