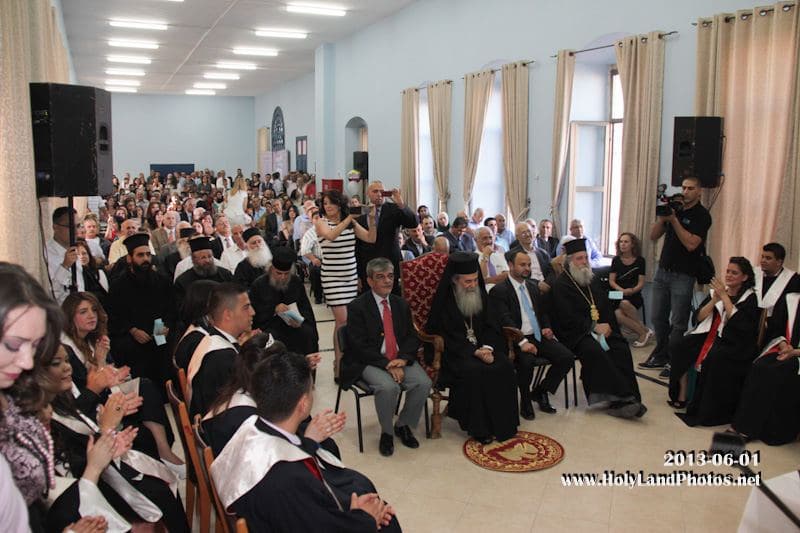 At 5:00 pm of Saturday the 19th of May/1st of June 2013, the graduation ceremony of 20 graduating students took place at the hall of ceremonies of “St Demetrius” Patriarchal School, in the presence of His Beatitude Theophilos III, Our Father and Patriarch of Jerusalem; the Consul General of Greece in Jerusalem, Mr Soterios Athanasiou and his honorable wife, a Greek Language teacher at the School; the representative of the Republic of Cyprus to the Palestinian Autonomy, Mr Antonios Samoutis, the representative of the Palestinian Autonomy Minister of Education, Mr Samir Gabriye, the Chairman of the School Board of Patriarchal Schools in Israel; the Most Reverend Esychios, Metropolitan of Kapitolia, the Grand Chancellor Aristarchos, Archbishop of Constantina; the Patriarchal Commissioner in Irbet, Jordan, His Eminence Philoumenos, Archbishop of Pella; Archdeacon f. Athanasios, Hierodeacon f. Eulogios, the School’s Principal Mr Samir Zananiri, teachers at the School and the graduates’ parents and other relatives.

The building of the School of “St Demetrius” which was essentially the latest expansion of the Patriarchate towards the Jaffa Gate, served as the Patriarchate School from which most of the either departed or living guardians of the Holy Sepulchre had graduated until the year 1970, when the School was transferred to the building now standing out on top of the Hill of St Sion.

The premises of the Hieratic School were offered from 1985 onwards by Diodoros, the Late Patriarch of Jerusalem, for the accommodation of a Preschool, an Elementary School, a High School and a Lyceum, maintained by the Patriarchate under the name “St Demetrius”, owing to the existence within the school complex, of an ancient Chapel in honor of the glorified great martyr St Demetrius the Myrrh-Bearer.

The well-organized ceremony began with the prayer “Christ is risen” in Greek and “Al Massih Kam” in Arab, followed by recitations of the National Palestinian Anthem and the Greek National Anthem.

The School Principal, Mr Samir Zananiri went on to extend his gratitude to His Beatitude for the moral and material help offered by the Patriarchate to the School, to Mr Hanna Amire, Chairman of the Committee on Christian Affairs, for the financial aid provided by the Palestinian Autonomy towards repairs and renovations at the School, and also praised the graduates for their performance and ethics, wishing that they successfully pursue their studies and perform well in society.

Two graduates offered flowers to his Beatitude and the Chairman of the School Board for their support to the School.

Three representatives of the graduating students spoke on behalf of their peers, one in Arab, one in English and one in Greek, pointing out how difficult it is to be diligent and perform well, and how such difficulties may be overcome with the help of parents and teachers, to whom they extended their deep gratitude.

A touching moment at the ceremony was the presentation of the Principal with an honorary plaque and the “change of guard” between this year’s (2012-2013) graduating students and seniors of the next academic year.

The ceremony was concluded with an address of His Beatitude in Arab, as follows at:https://en.jerusalem-patriarchate.info/ar/2013/06/01/2429/ stressing the importance attributed by the Patriarchate to the education of youth at schools maintained on its own expenses and the donations of charity foundations where the coexistence of Christian and Muslim students is favored and promoted and greatly contributes to the peaceful symbiosis and cooperation between such fellow students.

The ceremony closed with His Beatitude and the Professors conferring the titles to the graduating students, followed by the Palestinian National Anthem and His Beatitude’s prayer for longevity.