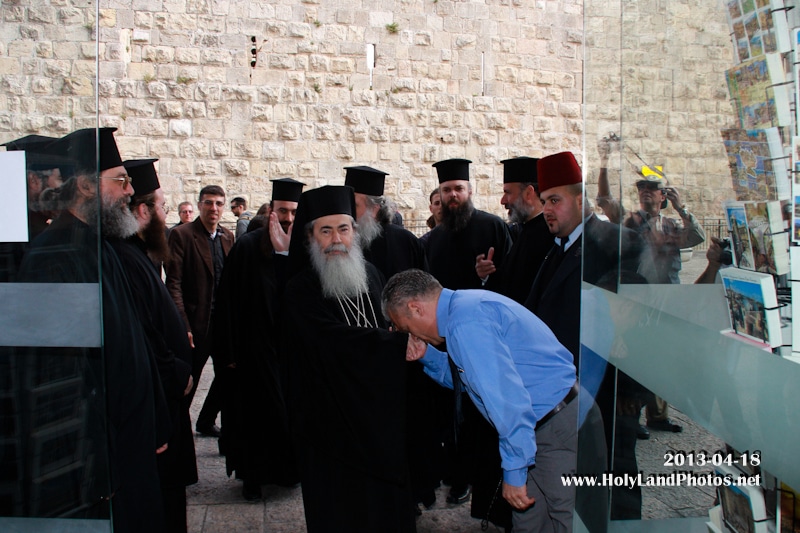 On Thursday, the 5th/18th of April 2013, His Beatitude Theophilos, Our Father and Patriarch of Jerusalem, inaugurated the Patriarchate’s Bookshop in Jaffa Gate.

The said bookshop is located in a spacious room on the ground floor of the Patriarchate’s Imperial Hotel, built in 1895 by the late Archimandrite Euthymios, Sacristan of the Holy Sepulchre during the prelacy of His Beatitude Nicodemus, Patriarch of Jerusalem. The hotel is centrally located at the main entrance to the Old City, namely the Gate of David –Jaffa Gate.

Roman Orthodox Anton Boulata has been appointed head of the bookshop. Already on display are Byzantine icons, books on Orthodox spirituality, on the history of the Holy Land and the Patriarchate of Jerusalem, sold in both Greek and Arab.

Useful information for pilgrims and other visitors will equally be available at the bookshop.

Upon the conclusion of the holy water rite, His Beatitude, accompanied by the Fathers of the Holy Sepulchre, addressed the guests, namely on behalf of the Palestinian Autonomy former Minister, Ms Khouloud Daibes, Mr Walid Dajani, holder of the Imperial Hotel, Dr Ioannis Tlil and other members of the Greek Orthodox congregation, with the wish that this new bookshop of the Patriarchate may become a meeting place for spiritual replenishment and a source of beneficial knowledge by means of the books on display and the services of its personnel.