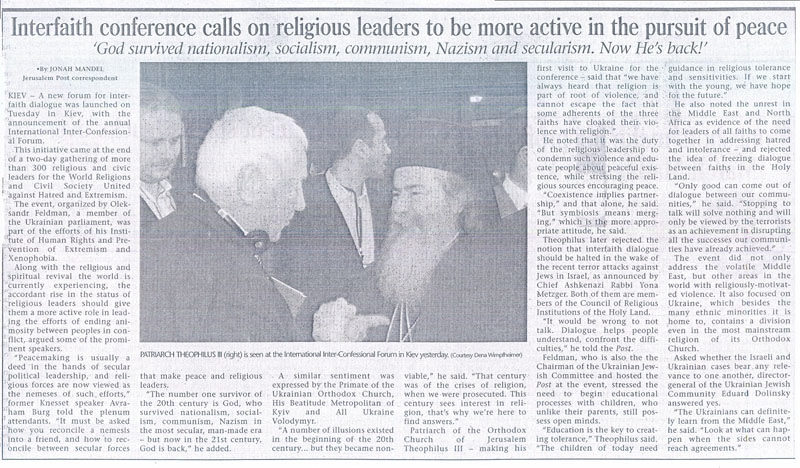 JERUSALEM POST ARTICLE ABOUT THE CONFERENCE OF HUMAN RIGHTS IN UKRAINE.

KIEV – A new forum for interfaith dialogue was launched on Tuesday in Kiev, with the announcement of the annual International Inter-Confessional Forum.

This initiative came at the end of a two-day gathering of more than 300 religious and civic leaders for the World Religions and Civil Society United against Hatred and Extremism.

The event, organized by Oleksandr Feldman, a member of the Ukrainian parliament was part of the efforts of his Institute of Human Rights and Prevention of Extremism and Xenophobia.

Along with the religious and spiritual revival the world is currently experiencing, the accordant rise in the status of religious leaders should give them a more active role in leading the efforts of ending animosity between peoples in conflict, argued some of the prominent speakers.

“Peacemaking is usually a deed in the hands of secular political leadership, and religious forces are now viewed as the nemeses of such efforts,” former Knesset speaker Avraham Burg told the plenum attendants. “It must be asked how you reconcile a nemesis into a friend, and how to reconcile between secular forces that make peace and religious leaders.

“The number one survivor of the 20th century is God, who survived nationalism, socialism, communism, Nazism in the most secular, man-made era – but now in the 21st century, God is back,” he added.

A similar sentiment was expressed by the Primate of the Ukrainian Orthodox Church, His Beatitude Metropolitan of Kyiv and All Ukraine Volodymyr.

“A number of illusions existed in the beginning of the 20th century… but they became nonviable,” he said. “That century was of the crises of religion, when we were prosecuted. This century sees interest in religion, that’s why we’re here to find answers.”

Patriarch of the Orthodox Church of Jerusalem Theophilos III – making his first visit to Ukraine for the conference – said that “we have always heard that religion is part of root of violence, and cannot escape the fact that some adherents of the three faiths have cloaked their violence with religion.”

He noted that it was the duty of the religious leadership to condemn such violence and educate people about peaceful existence, while stressing the religious sources encouraging peace.

“Coexistence implies partnership,” and that alone, he said.

“But symbiosis means merging,” which is the more appropriate attitude, he said.

Theophilus later rejected the notion that interfaith dialogue should be halted in the wake of the recent terror attacks against Jews in Israel, as announced by Chief Ashkenazi Rabbi Yona Metzger. Both of them are members of the Council of Religious Institutions of the Holy Land.

“It would be wrong to not talk. Dialogue helps people understand, confront the difficulties,” he told the Post.

Feldman, who is also the the Chairman of the Ukrainian Jewish Committee and hosted the Post at the event, stressed the need to begin educational processes with children, who unlike their parents, still possess open minds.

“Education is the key to creating tolerance,” Feldman  said.

“The children of today need guidance in religious tolerance and sensitivities. If we start with the young, we have hope for the future.”

He also noted the unrest in the Middle East and North Africa as evidence of the need for leaders of all faiths to come together in addressing hatred and intolerance – and rejected the idea of freezing dialogue between faiths in the Holy Land.

“Only good can come out of dialogue between our communities,” he said. “Stopping to talk will solve nothing and will only be viewed by the terrorists as an achievement in disrupting all the successes our communities have already achieved.”

The event did not only address the volatile Middle East, but other areas in the world with religiously-motivated violence. It also focused on Ukraine, which besides the many ethnic minorities it is home to, contains a division even in the most mainstream religion of its Orthodox Church.

Asked whether the Israeli and Ukrainian cases bear any relevance to one another, directorgeneral of the Ukrainian Jewish Community Eduard Dolinsky answered yes.

“The Ukrainians can definitely learn from the Middle East,” he said. “Look at what can happen when the sides cannot reach agreements”.

THE MONASTERY OF ST. ONUPHRIUS ON THE FIELD OF BLOOD

An article by: Heba Hrimat   “And the chief priests took the silver...

FEAST OF SAINTS CONSTANTINE AND HELEN, EQUALS TO THE APOSTLES

An article by: Heba Hrimat   Constantine was the son of Constantios Chloros,...