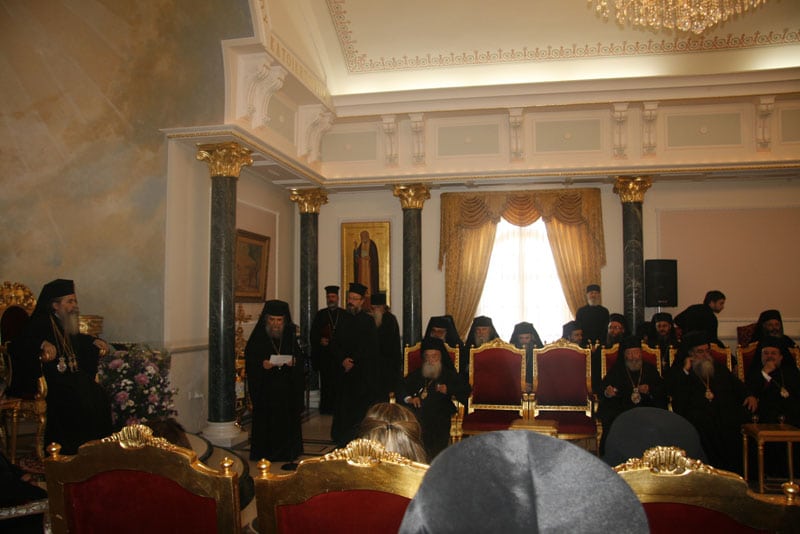 ADDRESS OF THE GENERAL MANAGER OF THE WEBSITE OF THE PATRIARCHATE ON THE OCCASION OF THE 5TH ANNIVERSARY OF THE ENTHRONEMENT OF HIS BEATITUDE.

Five years have passed since the assumption of Your duties on the Throne of the Mother of Churches.  During the time of Your Patriarchy our Directorate of the Patriarchate’s Website was created which now includes more than 20 associates who, though they are dispersed in 6 different cities, collaborate harmoniously having as their goal the respectable presentation of the work done by our Patriarchate on the World Wide Web via the Internet.

The central website of our Patriarchate www.jerusalem-patriarchate.info, according to the posted welcoming message, aims at «the presentation of those Holy Places where the immaculate feet of the Lord paced and of the people who are set as guardians of them».  The website was created with the decision of the 6th Holy Synod on October 10, 2006 becoming operational on June 1st 2007 initially in Greek and later in English and Arabic, and is continuously being enriched since then with new material.  It contains, amongst others, descriptions and historical notes regarding the Most Holy Venerable Sites as well as their full contact information, the administrative organization of the Patriarchate and a multitude of pictures.

Subsequently the website of the Non Governmental Organization «Romiosini» www.romiosini.org.gr was constructed.  This website, which acts synergistically with the central website of the Patriarchate, aims at the presentation of the Holy Venerable Sites worldwide.

Finally, on November 21 of last year, the News Portal of the Patriarchate en.jerusalem-patriarchate.info was activated through which the current state of events and the communiqués and press releases of the Patriarchate are made public, not only in Greek but also in Arabic and English.

It is true that the aforementioned three World Wide Web  ventures owe their existence to Your benediction and personal care, and rightly for all of the above we hereby express and offer  You the acknowledgment, appreciation and credit for this.

It is also true that with Your personal benediction and support we have further enhanced the presence of our Patriarchate on the Internet with three further Internet ventures, the «Romiosini Radio», the «Romiosini TV» and the web [electronic] presentation of the journal of the Patriarchate «New Zion».  Through these new Internet ventures which, with God’s help, will come into operation in the coming year, the liturgical life of our Patriarchate and the rest of its activities will be more readily visible both to its flock as well as to its friends around the world.

Due to all of the above, on behalf of the more than 20 associates that engage themselves for the dignified and respectable presence of our Patriarchate around the world via the Internet, I wish You good health and a long life for the glory of our Trinitarian God.

General Manager of the official Website of the Patriachate of Jerusalem.