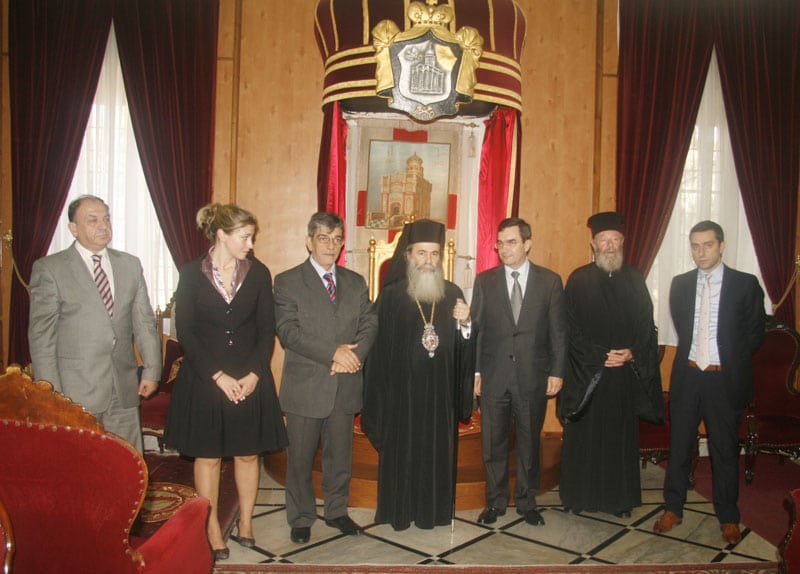 THE CHIEF OF THE HELLENIC POLICE VISITS THE PATRIARCHATE.

On Saturday, 17th / 30th of October 2010, the Chief of the Hellenic Police (EL.AS) Mr. Eleftherios Economou along with a small escort and accompanied by the Consul General of Greece in Jerusalem, His Excellency Mr. Athanasios Sotiriou, was received at the Patriarchate by His Beatitude Patriarch of Jerusalem Theophilos III. The Chief of the Hellenic Police was on an official visit to the State of Israel. Within the framework of this visit at the Patriarchate, Mr. Economou said to His Beatitude that he considers it his religious and national duty to visit the Holy Sepulchre and the Patriarchate in any way possible.

His Beatitude expressed His joy regarding the visit saying that He appreciates this attitude of respect towards the Holy Sepulchre and the Patriarchate and that no one is capable of separating Hellenism from Orthodoxy. This union has been achieved since the era when Hellenism joined the Church and, especially, the Church of Jerusalem. The Byzantine Emperors, the genus of the Rum Orthodox during the years of slavery, and Hellas (Greece) after her liberation, all assisted morally and materially in the religious, social, and philanthropic work of the Patriarchate and of the Brotherhood.

This work is visible in the Holy Shrines, the Holy Churches and in the civic and real estate property of the Patriarchate. All of the above contribute to the maintenance of the religious character of Jerusalem and to the identity of the Christians.

The Chief of Police expressed his wish to His Beatitude for a series of lectures to be given by Fathers of the Brotherhood in Athens for the benefit of the various units of the Hellenic Police personnel may acquaint themselves more closely with the work of the Patriarchate.